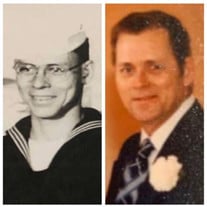 William “Bill” H. Webb, age 83 of Mattoon, IL passed away at 2:42 PM, Saturday, October 26,2019 at Sarah Bush Lincoln Health Care in Mattoon, IL. A funeral mass in his honor will be held at 10:00 AM, Thursday, October 31, 2019 at Immaculate Conception Catholic Church, 320 N. 21st Street, Mattoon, IL 61938. A committal service will immediately follow in Calvary Cemetery. The Honor Guard of the Mattoon VFW Post 4325 will conduct Military Rites. A visitation will be from 5:00 PM-7:00 PM, Wednesday, October 30, 2019 at Mitchell-Jerdan Funeral Home, located at 1200 Wabash Avenue, Mattoon, IL 61938. Bill was born on December 3, 1935 in Lawrenceville, IL the son of the late George N. and Leona V (Sparks) Webb. He married Pastora “Liza” Reola on April 18, 1981 in Clinton, IL; she survives. Other survivors include two children, Allan R. Webb Sr. and wife Ashley of Mattoon, IL, Leah R. Webb and fiancé Justin E. Arthur of Mattoon, IL; six grandchildren: Allan R. Jr., Alexa, Londyn, and Vincent Webb all of Mattoon, IL, Vivian Sobie of Chicago, IL, Austin Arthur of Centralia, IL; and one great-grandchild, Parker Bryan. His son, Kenneth Webb and three brothers, George, Wayne, and Kenneth Webb precede him in death. Bill honorably served our country in the Navy during the Korean Conflict. He was an electrician for Clinton Power Plant and member of IBEW Local 146 in Decatur, IL for over sixty years. He was also an active member of the American Legion Post 88 and Eagles Club of Mattoon, IL. Bill enjoyed gardening and cheering on the Chicago Cubs and the Chicago Bears. His family was the light of his life; Bill treasured all the special moments spent with his wife, children, and grandchildren. His memory will live on through them. Please visit www.mitchell-jerdan.com or www.facebook.com/mitchelljerdanfuneralhome to light a virtual candle in his honor or share a memory with the family.

The family of William "Bill" H. Webb created this Life Tributes page to make it easy to share your memories.