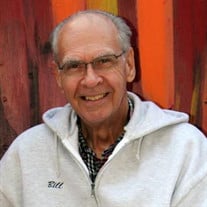 William “Bill” F. Lucier, age of 85 of Mattoon, IL peacefully passed away Wednesday evening, December 18, 2019 at Odd Fellow Rebekah Home in Mattoon, IL. A funeral service in his honor will be held at 10:00 AM, Saturday, December 28, 2019 at Mitchell-Jerdan Funeral Home, located at 1200 Wabash Avenue, Mattoon, IL. A committal service will immediately follow in Calvary Cemetery. A visitation will be held Friday night, December 27, 2019 from 4:00-7:00 PM at the funeral home. Bill was born on November 21, 1934 in Mattoon, IL the son of the late William F. and Alberta (Mettler) Lucier. He married Ruth Henne on July 18, 1953 in Mattoon, IL; she preceded him in death on March 1, 2012. He is survived by four children, Steve W. Lucier and wife LeeAnn of Lawrenceburg, IN, R. Renee Hildebrand and husband Alan of Mattoon, IL, Mark Lucier of Mattoon, IL, Kevin Lucier and wife Lisa of Marietta, GA; nine grandchildren: Christopher, Jason, Holly, Stephanie, Sean Lucier, Erika Brooks, Amy Hillman, Brian Lucier, and Katherine Lucier; fourteen great-grandchildren and three great great-grandchildren. He is preceded in death by his wife, parents, and one granddaughter, Amanda Lucier. Bill was a lifetime member of the Immaculate Conception Catholic Church and former business owner of the Fireplace and Lite Shoppe in Mattoon, IL from 1974 until 1994. After his retirement, Bill worked part time for Shimerz Glass and Bath Design Center in Mattoon, IL. He was a member of the Mattoon Kiwanis Club and enjoyed volunteering at the annual Pancake Breakfast. He was always a devout member of the R.O.M.E.O. (Retired Old Men Eating Out) Group, and looked forward to meeting every Tuesday at various local restaurants. Bill was an avid shooter and all around handy man. He was a wonderful husband, loving father, and a doting grandfather and great-grandfather. Memorials in Bill’s honor may be made to Catholic Charities, 4217 Dewitt Avenue, Mattoon, IL 61938. Please visit www.mitchelljerdan.com or www.facebook.com/mitchelljerdanfuneralhome to light a virtual candle in his honor or share a memory with the family.

William &#8220;Bill&#8221; F. Lucier, age of 85 of Mattoon, IL peacefully passed away Wednesday evening, December 18, 2019 at Odd Fellow Rebekah Home in Mattoon, IL. A funeral service in his honor will be held at 10:00 AM, Saturday, December... View Obituary & Service Information

The family of William "Bill" F. Lucier created this Life Tributes page to make it easy to share your memories.

Send flowers to the Lucier family.