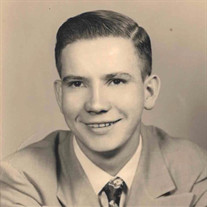 William A. Critchelow, age 85 of Mattoon, IL peacefully passed away Wednesday, January 15, 2020 at 3:28 A.M. at his residence surrounded by family. A memorial service in his honor will be held in the spring time with burial at Dodge Grove Cemetery. Mitchell-Jerdan Funeral Home, located at 1200 Wabash Avenue, Mattoon, IL 61938 is in charge of services. William was born on September 28, 1934 in Axtel, Kentucky the son of the late Steve and Annie (Lucas) Critchelow. He married Fay “Joan” Fickes on November 1, 1958 at The Immaculate Conception Catholic Church in Mattoon, IL. He is survived by his loving wife Joan Critchelow of Mattoon, IL; two daughters, Deborah Diaz of Mason City, IL, Lisa Khalighi and husband Sal of Charleston, IL; two grandchildren Salisa Khalighi of Paris IL, Natasha Khalighi of Charleston, IL; three great grandchildren Carson Khalighi, Arianna Hughes, Braxton Savard; one sister, Janis Gillis and husband Loren of Lerna, IL; two nieces, Julie Ames and husband Gary of Lerna, IL, Karen Skidis and husband Rick of Sullivan, IL; and one nephew, Kevin Gillis and wife Jan of Jewitt, IL. He is proceeded in death by his parents and one great-grandchild, Layla Savard. William worked for Meadow Gold Dairies as a whole sale milkman driver. He retired after thirty-eight years in 1994. He was a member of The Immaculate Conception Church in Mattoon, IL. William was involved in Mattoon Moose Lodge and Eagles Club. As a true outdoors man, William enjoyed hunting, fishing, bird watching, and woodworking. He loved western movie on television and playing golf. Williams was a devoted family man; his greatest love was his wife Joan, their beautiful family and beloved pets. Please www.mitchell-jerdan.com or www.facebook.com/mitchelljerdanfuneralhome to light a virtual candle in his honor or share a memory with the family.

William A. Critchelow, age 85 of Mattoon, IL peacefully passed away Wednesday, January 15, 2020 at 3:28 A.M. at his residence surrounded by family. A memorial service in his honor will be held in the spring time with burial at Dodge Grove Cemetery.... View Obituary & Service Information

The family of William A. Critchelow created this Life Tributes page to make it easy to share your memories.

Send flowers to the Critchelow family.