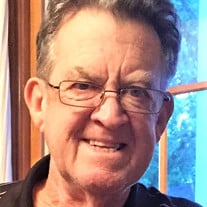 Mattoon, IL – William “Bill” A. Boyd, Jr., age 69, of Mattoon, IL, passed away at 5:35 p.m., June 20, 2017 at Sarah Bush Lincoln Health Center. The funeral service in his honor will begin at 10:00 a.m., Saturday, June 24, 2017, at Mitchell-Jerdan Funeral Home, 1200 Wabash Avenue, Mattoon, IL, 61938. Reverend Ian Stamps will officiate. Burial will follow in Elder Cemetery, Farina, IL, with military rites conducted by the American Legion of Farina, IL. Visitation will be held at the funeral home Friday evening from 4:00-7:00 p.m. Born October 18, 1947, in Salem, IL, Bill was the son of William A., Sr. and Marjorie R. (Vanderwolk) Boyd. He is survived by his life partner, Anna M. Boyd; three children, William Arthur Boyd, III of Mattoon, IL, Stephanie J. Boyd of Chicago, IL, and Steven M. Boyd and wife Libbey of Decatur, IL; one sister, Linda James and husband John of Marshall, IL; and three grandchildren, Jacqueline L. and Jacob I. Boyd of Mattoon, IL, and Kai A. Boyd of Decatur, IL. He was preceded in death by his parents and one brother, James Boyd. Mr. Boyd served our country with the United States Army in the 11th Armored U.S. Calvary during the Vietnam Conflict. An employee of Upchurch and Associates, Mr. Boyd was a Registered Land Surveyor for more than 35 years. He was a member of the VFW Lodge, the American Legion, and the Eagles Lodge, all in Mattoon, IL. He enjoyed traveling, playing golf, and any activity that involved his family. To say that Bill was a sports fan would be a considerable understatement. He had attended literally thousands of various games over the years. He was an avid St. Louis Cardinals fan, a super fan of high school basketball, coached Little League baseball, and was known for sharing his considerable wealth of sports knowledge. Memorials in his honor may be made to the American Heart Association or Camp New Hope. Please visit www.mitchell-jerdan.com or www.facebook.com/mitchelljerdanfuneralhome to light a virtual candle in his honor or share a memory with his family.

The family of William A. Boyd created this Life Tributes page to make it easy to share your memories.

Send flowers to the Boyd family.