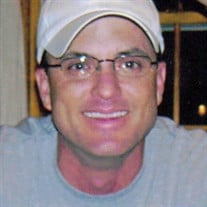 William “Billy” Arthur Boyd III, age 50 of Mattoon, IL passed away at 1:20 AM, Tuesday, June 16, 2020 at Carle Foundation Hospital in Champaign-Urbana, IL. A funeral service in his honor will be held at 10:00 AM, Saturday, June 20, 2020 at Mitchell-Jerdan Funeral Home, 1200 Wabash Avenue, Mattoon, IL 61938; Reverend Ian Stamps will officiate. A committal service will immediately follow in Dodge Grove Cemetery. A visitation will be from 4:00 PM-7:00 PM, Friday, June 19, 2020 at the funeral home. Billy was born on June 14, 1970 in Wurzburg, Germany, the son of William A. and Anna M. (Lacey) Boyd. He is survived by his two children, Jackie L. Boyd of Normal, IL, Jacob I. Boyd of Mattoon, IL; his mother, Anna Boyd of Mattoon, IL; one sister, Stephanie J. Boyd of Chicago, IL; one brother, Steven M. Boyd and wife Libbey of Cape Coral, FL; three special nephews, Kai A., Dax I. and Jet J. Boyd of Cape Coral, FL. He was preceded in death by his father, William Arthur Boyd Jr. Billy graduated from the University of Illinois in Champaign-Urbana with a Bachelor’s degree in Mechanical Engineering. He spent most of his career at Cabot Corporation in Tuscola, IL and member of Broadway Christian Church in Mattoon, IL. He was a proud member of the Humboldt Pack 63 Cub Scout program where he enjoyed competing at the annual Pinewood Derby. At a young age, Billy’s love for sports and his athleticism was evident. His childhood was much like the movie Sandlot, playing baseball with his friends while finding mischief when off the field, creating bonds that exist to this day. Billy had a passion for golf and would have his mother drop him off at Charleston Country Club early in the morning with just a sandwich and golf clubs, so he could play the entire day. At one point, Billy shot an astounding score of 29; fascinated by his own performance, he would regularly ask his brother “do you understand the gravity of a 29?” Although sports were a big part of Billy’s life, family was everything to him. Growing up, he cherished the time down at his grandparent’s farm with his siblings and cousins fishing, camping, and playing ping-pong. The love for his two children, Jackie and Jacob, was unmeasurable. Billy treasured the times he and Jackie spent playing tennis and sharing music interests. He had a special bond with Jacob and spent many hours hiking, playing Yahtzee, doing puzzles, bowling, and simply being in each other’s presence. Billy’s children were his pride and joy. Billy was one-of-a-kind, who was a friend to many people. He has a tender, soft, and a sensitive soul. His radiating smile made you feel like you were the most important person in the world. Memorials in his honor may be made to Broadway Christian Church, 1205 S 9th Street, Mattoon, IL 61938, or a charity of your choice. Please visit www.mitchell-jerdan.com or www.facebook.com/mitchelljerdanfuneralhome to light a virtual candle in his honor or share a memory with his family.

Customized sympathy cards. Mailed for you.