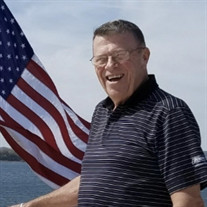 William “Bill” D. Morgan, age 72 of Mattoon, IL passed away at 10:38 AM, Wednesday, February 12, 2020 at CHI St. Vincent in Little Rock, AR. A Celebration of Life will be held at 12:00 PM-3:00PM, Saturday, February 22, 2020 at Mitchell-Jerdan Funeral Home, located at 1200 Wabash Avenue, Mattoon, IL 61938. A memorial service in his honor will be held the same day at 3:00PM at the funeral home; Pastor Don Pankey will officiate. Masonic Rites will be conducted by Mattoon Masonic Lodge #260 A.F.A.M at 2:45 PM. Military Rites will follow conducted by Mattoon VFW Post 4325. A private family inurnment will take place at a later date. Bill was born on April 25, 1947 in Trilla, IL the son of the late Billy and Verneda H. (Strohl) Morgan. He married Jill A. Bogardus on May 17, 1975 in Mattoon, IL; she passed away on May 22, 2016. Bill later married Suzanne Albert on January 23, 2018 in Panama City, FL. Bill is survived by his wife, Sue Morgan; two sons, Phillip D. Morgan and wife Tara of Union, KY, Stephen B. Morgan of Mattoon, IL; three bonus children, Wendy Robinson and husband Gregg; Ryan Montgomery and wife Heather; Joe Connelly and wife Lori all of St. Peters, MO; two granddaughters, Quincy and Lynley Morgan, of Union, KY; thirteen bonus grandchildren; five bonus great-grandchildren; one sister, Ann Daniels of Mattoon, IL; three sister in laws, Jacqui McKibben of Neoga, IL, Kaye Gover and husband Phil of Jenks, OK, Diana Morgan of Humboldt, IL; and numerous cousins, nieces and nephews. Bill is preceded in death by two brothers, Dan and David Morgan. Bill honorably served our country in the Air Force and was stationed in Montana. He attended Eastern Illinois University in Charleston, IL where he received a Bachelor’s degree in accounting. Bill then became the Associate Director of Grants and Loans for The University of Illinois in Champaign-Urbana, IL: he retired on March 1, 2002. He attended Winebrenner Memorial Church of God in Mattoon, IL and Florissant Presbyterian Church in Florissant, MO. He was a member of the Eagle’s Club, VFW, Moose Lodge, and American Legion, in Mattoon, IL. After retirement, Bill became a member of Charleston Country Club and treasured his days on the golf course. He was a Life Master Bridge Player and in the Mattoon Bowling Association Hall of Fame. He relished in the moments spent with family, especially his grandchildren, and he will be lovingly remembered and greatly missed. In lieu of flowers, contributions in Bill’s honor may be made to Winebrenner Memorial Church of God, 300 Illinois Avenue, Mattoon, IL 61938 or Florissant Presbyterian Church, 660 Charbonier Rd, Florissant, MO 63031. Please visit www.mitchell-jerdan.com or www.facebook.com/mitchelljerdanfuneralhome to light a virtual candle in his honor or share a memory with the family.

The family of William "Bill" D. Morgan created this Life Tributes page to make it easy to share your memories.