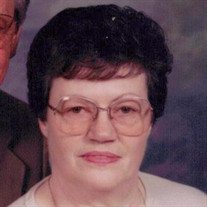 Virginia “Jenny” E. (Parsley)Lauter, age 82 of Mattoon, IL formerly of Neoga, IL passed away at 6:00 AM, Saturday, December 14, 2019 at Heartland Christian Village in Neoga, IL. A graveside service in her honor will be at 11:00 AM on Thursday, December 19, 2019 in Dodge Grove Cemetery; Pastor Johnny Aseltine will officiate. Mitchell-Jerdan Funeral Home, 1200 Wabash Avenue, Mattoon, IL 61938 is in charge of services. Jenny was born on September 23, 1937 in Neoga, IL the daughter of the late Henan U. and Lela N. (Alwardt) Orsborn. She married K. Dean Parsley on January 29, 1955 in Neoga, IL; he passed away on March 13, 1997. She later married David Lauter on September 20, 1998; he survives. She is survived by one daughter, L. Kay Fore and husband Bill of Mattoon, IL; four stepchildren, Dee Cottrill and Tawni of Kansas, IL, David Lauter and Donna of Portland, TN, Leona Albin and Keith of Mattoon, IL, Douglas Lauter and Tina of Mattoon, IL; one grandchild, April Russell and husband Korey of Toledo, IL; ten step-grandchildren: Salina Wilson, Chris Lauter, Joshua Cottrill, Tiffany Cummins, Terra Szczesniak, Aaron Lauter, Michelle Weaver, Michael Lauter, Amber Winans; twenty-four great-grandchildren; and one brother, Russell R. Orsborn of Effingham, IL. She is preceded in death by three sisters and three brothers. Jenny attended Central Community Church in Mattoon, IL. Throughout the years, she worked for Brown Shoe Company, D&W Restaurant, Little Chef Café, and eventually retiring from Fellowship Center in the maintenance department. Jenny hobbies included sewing and quilting. She enjoyed traveling across the entire country on the train, the western states being her most enjoyable visits. However, her most treasured and memorable adventures was the “girl’s trip” she took every other year with her daughter and granddaughter, often visiting Disney World. Jenny loved her family and will leave a lasting memory in their hearts; she will be missed and fondly remembered. Please visit www.mitchelljerdan.com or www.facebook.com/mitchelljerdanfuneralhome to light a virtual candle in her honor or share a memory with the family.

The family of Virginia "Jenny" E. (Parsley) Lauter created this Life Tributes page to make it easy to share your memories.