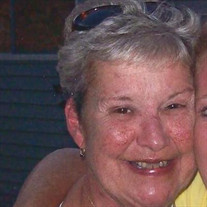 Victoria “Vicky” Sue Ashworth, age 72 of Mattoon, IL peacefully passed away at 2:30 P.M., Friday, August 17, 2018 at home surrounded by her loving family. A funeral service in her honor will be held at 11:00 A.M., Tuesday, August 21, 2018 at Mitchell-Jerdan Funeral Home, 1200 Wabash Avenue, Mattoon, IL; Reverend Michael Smith will officiate. Burial will immediately follow at Dodge Grove Cemetery in Mattoon, IL. Visitation will be held from 9:00 A.M. until the time of service at the funeral home. Vicky was born on January 26, 1946 in Mattoon, IL the daughter of the late Bill and Phyllis (Gullion) Driskell. She married Larry Ashworth on August 7, 1965 in Mattoon, IL. She is survived by her husband of fifty-three years, Larry Ashworth of Mattoon, IL; one son, Todd Ashworth and wife Amber of Mattoon, IL; one daughter, Angi Ashworth of Mattoon, IL; five grandchildren, Cody Ashworth of Denver, CO, Austin Ashworth and fiancé Maggie of Sullivan, IL, Mitchel Hirsch of Mattoon, IL, Shay Ashworth of Neoga, Clayton Hirsch of Mattoon, IL; two great-grandchildren, Annabelle and Reese Carroll of Sullivan, IL. Vicky was a former employee of Brown Shoe Factory, Mattoon Community Unit School District #2, Eastern Illinois Area Special Education, and assisted on the family farm. She was a member of First United Methodist Church, enjoyed arts and crafts and attended many shows over the years. Vicky was known for her quick wit and great sense of humor, many loved her. Her family was her pride and joy, and they will miss her dearly. Memorials in her honor may be made to Corn Belt Shrine Club, PO Box 141, Gibson City, IL 60936. Please visit www.mitchelljerdan.com or www.facebook.com/mitchelljerdanfuneralhome to light a virtual candle in her honor or share a memory with the family.

The family of Victoria "Vicky" Sue Ashworth created this Life Tributes page to make it easy to share your memories.

Send flowers to the Ashworth family.