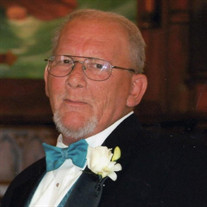 Van Alan Webb, of Mattoon, IL passed from this life at the home he shared with his wife, Celeste, on April 7, 2021 at 10:45 AM. A funeral service to commemorate Van’s life will be held at 2:00 PM, Monday, April 12, 2021 at Mitchell-Jerdan Funeral Home, located at 1200 Wabash Avenue, Mattoon, IL 61938. A committal service will follow at Calvary Cemetery. A visitation service will be held on Sunday evening, April 11, 2021 from 5:00 PM-8:00 PM at the funeral home. Van was born at Castle Air Force Base in Atwater, CA on July 26, 1954, the son of Joe and Doris (Van Gundy) Webb. On August 18th, 1972, Van married his high school sweetheart, Celeste Zimmerle, at the Immaculate Conception Church in Mattoon, IL and they began their life together. Van worked as a truck driver, starting in the family business with his dad and later long hours over the road, to provide for his wife and four children. He enjoyed teaching his children the love of sports, especially softball and wrestling, and spending time with family swimming, boating, skiing and tubing, scuba-diving, hunting, fishing, and playing with his grandchildren. Van is survived by his wife, Celeste (Zimmerle) Webb; three daughters, Theresa and Jake Rhodes, Vanessa and Brad Duncan, and Meredith and Nick Perez; eight grandchildren: Connor Rhodes, Kiefer Duncan, Katheryn Perez, Gavan Rhodes, Reagan Duncan, Alana Perez, Mia Perez, and Colton Perez. Van is also survived by his devoted mother, Doris Webb; two brothers, Mack and Matt Webb; his number one, Leann and John Polston; special people in his life, including Dwight Fitt, Harold Van Gundy, Clyde Self, Veronica Davis; and many wonderful nieces, nephews, and cousins. To meet Van at his passing was his only son, Mitch Webb, who died in a vehicular collision at age 23 on November 2nd, 2012; Van’s father, Joe Webb; and his sister, Joella Clearwater, also preceded him in death. Memorial contributions may be made to the Mitch Webb Memorial Wrestling Scholarship and mailed to Mitchell-Jerdan Funeral Home, 1200 Wabash Avenue, Mattoon, IL 61938. For those who are unable to attend the funeral service, a live tribute will be available at www.mitchell-jerdan.com or www.facebook.com/mitchelljerdanfuneralhome .

The family of Van A. Webb created this Life Tributes page to make it easy to share your memories.

Van Alan Webb, of Mattoon, IL passed from this life at the home...