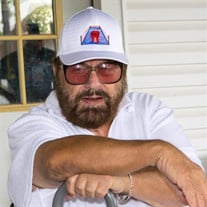 Tommie McKibben, age 81 of Lake Mattoon, IL went to his Lord Sunday, September 9, 2018 from his residence. At Tommie’s request, he will be cremated and wishes no services. Mitchell-Jerdan Funeral Home is assisting the family with arrangements. Tommie was born January 5, 1937 in Mattoon to Fred and Alice (Jones) McKibben. He married Jacqui Borgardus on August 22, 1965. Surviving are his wife, Jacqui; son, Curt (Jane) McKibben of Mattoon, IL; two grandsons, Clint (Ana) McKibben of Sullivan, IL, Clay (Beth) McKibben of Mattoon, IL; four great-grandchildren, several cousins, nieces, nephews, and his coffee klatch from Mattoon Mall. He loved you all. He was preceded in death by his parents and sister, Nancy Waltrip. He worked beginning of his senior year of high school at Central National Bank for over eleven years. After that, he owned and operated Tomaso’s Restaurant in Mattoon. He was an avid motorcycle rider, having owned Triumph, Suzuki and finally Harley. Tommie boxed in his younger years and went near and far to watch matches, seeing some of the future stars. Special thanks to Dr. Joag and staff, and Lincoln Land Hospice, especially Emily. You truly are wonderful people. Memorials may be made in his honor to American Cancer Society, 2509 S. Neil Street, Champaign, IL 61820. Please visit www.mitchell-jerdan.com or www.facebook.com/mitchelljerdanfuneralhome to light a virtual candle in his honor or share a memory with the family.

Tommie McKibben, age 81 of Lake Mattoon, IL went to his Lord Sunday, September 9, 2018 from his residence. At Tommie&#8217;s request, he will be cremated and wishes no services. Mitchell-Jerdan Funeral Home is assisting the family with arrangements. Tommie... View Obituary & Service Information

The family of Tommie McKibben created this Life Tributes page to make it easy to share your memories.

Send flowers to the McKibben family.