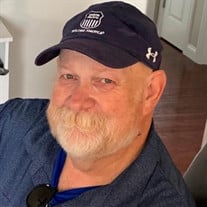 Timothy Allen Harms, age 66 of Mattoon, IL passed away at his residence on Monday, June 28, 2021. The funeral service will be held at 12:00 pm on Tuesday, July 6, 2021, at Wolfersberger Funeral Home in O’Fallon, Illinois. The visitation will be from 10:00 am - 12:00 pm. A private burial will follow for immediate family. Mitchell-Jerdan Funeral Home, located at 1200 Wabash Avenue, Mattoon, IL 61938 and Wolfersberger Funeral Home in O’Fallon, IL are assisting the family with arrangements. Tim was born on May 26, 1955, in Portland, Oregon to the late Mervin and Doris (Krassig) Harms. He grew up in Omaha, Nebraska, was the youngest of six children and was a proud graduate of Omaha South High School. He married Karen Monson on June 18, 1977, in Omaha, Nebraska. They later divorced but shared five children: Matthew Harms of Fairview Heights, IL, Brianne Stinchfield (Jim) of Collinsville, IL, Lee Harms (Karen) of Mattoon, IL, Chad Harms (Sarah) of O’Fallon, IL, Daniel Harms (Kristen) of Fairview Heights, IL; seven grandchildren, Kameron, Korben, Karson, Colton, August, Elizabeth and Gordon; two brothers, Steve Harms (Patty) of Omaha, NE, Mike Harms of Texas; one sister, Colleen May (John) of Omaha, NE; and many in-laws, nieces, nephews and Godchildren. Tim was preceded in death by one brother, Gary Harms; one sister, Gay Nell Lewis; and one granddaughter, Eloise Harms. Tim was a devoted employee of Union Pacific Railroad in Omaha, NE, with trains being a large part of his life for 38 years before his retirement in 2015. He was the ultimate Nebraska Cornhuskers football fan. He became a devoted Cincinnati Reds baseball fan during the Johnny Bench era. Tim would attend the College World Series in Omaha any chance he had. Tim played baseball and softball much of his young adult life. He was a member of the Knights of Columbus and Shiloh Eagles while located in O'Fallon, IL. In his retirement, he enjoyed fishing with his grandkids, gardening, tending to his tomatoes and tinkering in his garage. Above all, watching his grandkids play sports was his favorite past-time. Tim was a doting father, always involved in all aspects of his childrens' lives. He was their biggest supporter and the loudest cheerleader at sporting events, graduations, and dance recitals. He coached many soccer and t-ball teams at St. Clare Catholic School in O'Fallon, IL and the O'Fallon Boosters Club. He constantly made them laugh with his quirks and unique sense of humor. He was a proud and adoring grandfather; his grandkids were his whole world. Tim left a legacy of love and laughter and not taking life too seriously. He will be remembered for his heart of gold. He will be missed greatly, but his memory will live on through his loved ones. Please visit www.mitchell-jerdan.com or www.wfh-ofallon.com to light a virtual candle in his honor or share a memory with the family.

Timothy Allen Harms, age 66 of Mattoon, IL passed away at his residence on Monday, June 28, 2021. The funeral service will be held at 12:00 pm on Tuesday, July 6, 2021, at Wolfersberger Funeral Home in O&#8217;Fallon, Illinois. The visitation... View Obituary & Service Information

The family of Timothy Allen Harms created this Life Tributes page to make it easy to share your memories.

Timothy Allen Harms, age 66 of Mattoon, IL passed away at his...

Send flowers to the Harms family.