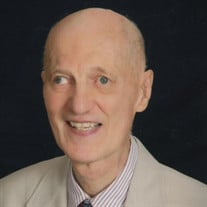 Thomas E. Littleton, age 86 of Mattoon, IL peacefully passed away on Sunday, November 28,2021 at Sarah Bush Lincoln Health Center in Mattoon, IL. A funeral mass in his honor will be held at 10:00 AM, Friday, December 3, 2021, at Immaculate Conception Church, 320 N. 21st Street, Mattoon, IL 61938. A committal service will immediately follow in Calvary Cemetery in Mattoon, IL with Military Rites performed by Mattoon VFW Post 4325. The visitation will be held one hour prior at the church. Mitchell-Jerdan Funeral Home, located at 1200 Wabash Avenue, Mattoon, IL 61938 is in charge of services. Tom was born on February 1, 1935, in Mattoon, IL to the late Edward D. and Marion E. (King) Littleton. He married Janet “Louise” Douglas on July 27,1957 in Mattoon, IL and were happily married for fifty-nine years; she preceded him in death on October 7, 2016. He is survived by their children, Thomas “Andy” Andrew Littleton and wife Tamara of Round Lake, IL, Michael “Mike” Lee Littleton and wife Karen of Mattoon, IL, Phillip “Phil” Wayne Littleton and wife Sheila of Mattoon, IL, and Paul C. Littleton and wife Jody of Champaign, IL; five grandchildren; brother, Steven Littleton and wife Andrea of Fort Myers, FL; and sister, Sharon Shriver of Mooresville, IN. He is preceded in death by one son, John Douglas Littleton, and grandson, Wesley Andrew Littleton. Tom honorably and proudly served his country in the United States Army in the 4th Armored Division from 1957 until 1959 in Germany. During that time, he was an Assistant Director of the Army Education Director. After his honorable discharge, Mr. Littleton obtained an accounting degree from Eastern Illinois University in Charleston, IL. He then worked as an accountant for many years at Meadow Gold Dairies and later in the production control department for Anamet Electrical, INC in Mattoon, IL before his retirement in 1998. A man of great faith, Tom was a devout member of Immaculate Conception Church of Mattoon, IL where he was actively involved with Mattoon Knights of Columbus Council #1057 and volunteered at numerous catholic charities. He was a former member of United States Junior Chamber, also known as “Jaycee’s”, serving the community for numerous years. Tom was a family man who loved his children and grandchildren. His presence will be greatly missed but his memory will live on through his loved ones. Please visit www.mitchell-jerdan.com or www.facebook.com/mitchelljerdanfuneralhome to light a virtual candle in his honor or share a memory with the family.

Thomas E. Littleton, age 86 of Mattoon, IL peacefully passed away on Sunday, November 28,2021 at Sarah Bush Lincoln Health Center in Mattoon, IL. A funeral mass in his honor will be held at 10:00 AM, Friday, December 3, 2021, at Immaculate Conception... View Obituary & Service Information

The family of Thomas E. Littleton created this Life Tributes page to make it easy to share your memories.

Send flowers to the Littleton family.