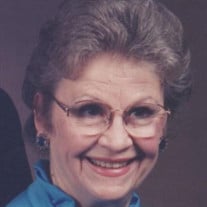 Thelma R. (Tutt) Bartimus, age 97 of Mattoon, IL passed away at 12:45 AM, Tuesday, August 11, 2020 at Odd Fellow-Rebekah Home, Mattoon, IL. A funeral service in her honor will be held at 1:00 PM Sunday, August 23, 2020 at Mitchell-Jerdan Funeral Home, 1200 Wabash Avenue, Mattoon, IL 61938; Pastor Ron Dickinson will officiate. A committal service will immediately follow at Mound Cemetery in Charleston, IL. The visitation will be from 11:00 AM until the service begins. Thelma was born March 15, 1923 in Berea, KY, a daughter of the late Robert Bruce and Stella May (Swango) Tutt. She married Charles Verlus Bartimus in Charleston, IL, on August 11, 1946. She is survived by one son, Ted A. Bartimus and wife Maneasseaha Bartimus of Falls Church, VA; three grandchildren, Ashley H. Bartimus of Villa Grove, IL, Paige K. Bartimus of Hammond, IL, and Ted A. Bartimus II of Falls Church, VA; one great-granddaughter, Mila H. Heycoop of Hammond, IL, and several nieces and nephews. She is preceded in death by her husband of 73 years, Charles V. Bartimus, two sisters, Juanita Woods and Roberta Gibbons; and one brother Thomas Tutt. Thelma graduated high school from Hindsboro, Illinois in 1942, and also attended high school in Humboldt, Illinois and at Illinois Teachers College (now Eastern Illinois University) in Charleston, IL. Thelma was a homemaker caring for her husband, son, nephews, nieces, as well as her mother and aunt in their later years. While her husband Charles had earned a Master’s degree, Thelma often quipped that she also earned a PHT (Put Hubby Through). Thelma put her family first in every aspect of life, spending much of her time with her granddaughters, grandson, nephews and nieces sharing her knowledge about plants, birds, gardening and cooking. Her reputation for cooking, as well as identifying the species of a bird merely by the sound of their tweets drew admiration from family and neighbors alike. Thelma’s passion for nature emerged from her childhood in which she grew up on farms. She and her siblings spent countless hours riding horses and helping their parents perform the daily chores of farm life. Upon graduating high school, Thelma worked as a waitress in cafes on the square in Charleston, Illinois where she met Charles, a young university student who had just mustered out of the Navy at the end of World War II. They remained together for 73 years in marriage. When the grandkids, nieces and nephews were not around, Thelma pursued her interests in electronic media in which she became an aficionado in the early years of the internet. She also took hundreds of photos and made video tapes of trips she and Charles took around the country, including many trips made to her birthplace state of Kentucky, where she looked up relatives. Please visit www.mitchell-jerdan.com or www.facebook.com/mitchelljerdanfuneralhome to light a virtual candle in her honor or share a memory with the family.

The family of Thelma R. (Tutt) Bartimus created this Life Tributes page to make it easy to share your memories.

Send flowers to the Bartimus family.