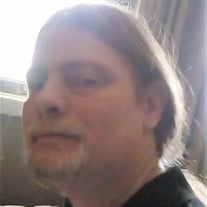 Ted “T.J.” Lawson Welton Jr., age 42 of Mattoon, IL passed away Sunday, May 27, 2018, 10:36 P.M. at Sarah Bush Lincoln Hospital in Mattoon, IL. A celebration of life will be held at a later date. Mitchell-Jerdan Funeral is assisting the family with arrangements. T.J. was born January 17, 1976 in Mattoon, IL, the son of Teddy L. and Lucille “Pat” (Flick) Welton. He married Ondrea F. VanOstran on August 31, 2017. He is survived by his wife, Ondrea Welton of Mattoon, IL; seven children, Demetrius A., Nektarius L., Alexandria F., Aphrodite M. Welton of Mattoon, IL, Maria Bishop of Jewett, IL, Maverick and Ashlie Welton of Swansea, SC; his mother, Pat Welton of Mattoon, IL; two brothers, Steve Welton and wife Mary of Windsor, IL, Marty Welton of Sullivan, IL; one sister, Teresa Urie of Mattoon, IL. He is preceded in death by his father and two brothers, Stanley and Edward Welton. T.J. was an employee of Taco Bell. He loved spending all of his time with his family, watching movies, and playing video games. He enjoyed rooting for the Chicago Cubs while his wife cheered for the St. Louis Cardinals. T.J. will be greatly missed by all who know him. Memorials in T.J.’s honor may be made to the family in care of Mitchell-Jerdan Funeral Home, 1200 Wabash Avenue, Mattoon, IL 61938. Please visit www.mitchell-jerdan.com or www.facebook.com/mitchelljerdanfuneralhome to light a virtual candle in his honor or share a memory with the family.

The family of Ted Lawson Welton Jr. created this Life Tributes page to make it easy to share your memories.

Send flowers to the Welton family.