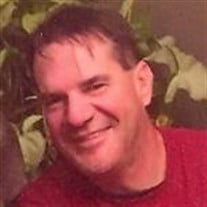 Mattoon, IL – Steve Christion Helton, age 46, of Mattoon, IL, passed away at 11:05 p.m., Saturday, July 2, 2016, at Carle Foundation Hospital in Urbana, IL due to complications from a work accident on June 2, 2016 The memorial service in his honor will begin at 11:00 a.m., Friday, July 8, 2016, at the Mitchell-Jerdan Funeral Home, located at 1200 Wabash Avenue, Mattoon, IL 61938 with Reverend Matthew Froeschle officiating. Visitation will be from 10 a.m. until the time of service. Interment will follow at Dodge Grove Cemetery. Born in Mattoon, IL on January 29, 1970, Steve was the son of Dr. Tim Helton and Linda Wilson. He is survived by his mother, Linda Wilson of Mattoon, IL; One sister Sherri Fraine and her husband Andy of Morris, IL; one niece Morgan Potochnic and one nephew Ryan Potochnic both of Morris, IL; his Uncle, Merle Vissering of Leesburg, FL; half-sister Holly Julian and her husband Jeremy of Long Grove, IL, and his beloved canine friend Blue. He was preceded in death by his Dad Dr. Tim Helton, and Step-dad Ron Wilson. Mr. Helton was employed by Industrial Services in Mattoon, IL, and was a member of the roofers union. He earned his associates degree in culinary arts from Joliet Junior College. Fishing and hunting were among his favorite ways to pass the time. He was also an avid Chicago Bears, and Chicago Cubs fan. You rarely saw Steve without his canine companion, Blue who he shared a special bond with. Please visit www.mitchell-jerdan.com or www.facebook.com/mitchelljerdanfuneralhome to light a virtual candle in his honor or share a memory with his family.

The family of Steven Christion Helton created this Life Tributes page to make it easy to share your memories.

Send flowers to the Helton family.