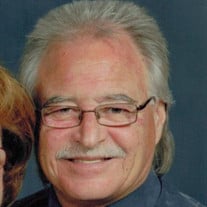 Stephen A. Thompson, age 69 of Mattoon, IL passed away on Jul 22, 2021, at Carle Foundation Hospital in Champaign-Urbana, IL. A funeral service in his honor will be held at 1:00 PM, Tuesday, July 27, 2021, at Mitchell-Jerdan Funeral Home, 1200 Wabash Avenue, Mattoon, IL 61938; Reverend Matthew Froeschle will officiate. A committal service will immediately follow in Dodge Grove Cemetery. Military Rites will be conducted by Mattoon VFW Post 4325. The visitation will be held from 10:00 AM until the time of service at the funeral Home. Steve was born on December 20,1951 in Mattoon, IL to the late Robert L. and Rhea J. (Christy) Thompson. He married Kathy L. Pardieck on April 20, 2002, in Mattoon, IL. He is survived by his loving wife Kathy Thompson of Mattoon, IL; two children, Erin N. Spurgeon and husband Ronnie of Mattoon, IL, Andrea K. Gilbert and husband Shane of Mahomet, IL; two brothers, Gregory M. Thompson and wife Gloria J. of Mattoon, IL, Douglas K. Thompson and wife Debbie A. of Eureka, MO; one sister, Mary Margaret “Cookie” Dooley and husband Jerry of Terre Haute, IN; three nieces, Bethany L. Thompson and fiancé Chris Schilling of Clifton, IL, Lindsey L. Hernandez and husband Lance of Aransas Pass, TX, Jordan N. Thompson of Eureka, MO; one nephew, Daley R. Thompson of Eureka, MO; one great-niece, Hannah M. Poffinbarger of Clifton, IL; six grandchildren: Dylan, Maddy, Aidan, Jackson, Mitchell, Ava; and his canine companions, Cisco and Jaxxi. Steve honorably and very proudly served our great country in United States Army in the 101st Airborne Division and 8th Infantry Division. Throughout the years after his brave service, Steve acquired an impressive collection of military memorabilia. He obtained his bachelor’s degree in History from Southern Illinois University in Carbondale, IL and master’s degree in Historic Administration from Eastern Illinois University in Charleston, IL. Dedicated to his passion, Steve was a historic preservation consultant and served in a variety of cultural resource management and preservation-related capacities with the National Park Service, the Illinois Historic Preservation Agency, the University of Illinois at Urbana-Champaign, and the U.S. Department of Defense. As the principal of the Mattoon-based Intrepid Consulting Services, Inc., Steve worked with public and private clients to achieve historic preservation regulatory compliance for projects affecting historic resources. A post-Napoleonic military historian, Steve had the good fortune to work on unique historic property management and archaeological projects, such as the relocation and rehabilitation of the U-505 World War II German submarine exhibited at Chicago's Science and Industry Museum, and archaeological surveys of Little Big Horn, Stones River and Wilson's Creek National Battlefields, and the Mattoon Civil War Memorial Ellipse. In 1998, Steve was commissioned a "Kentucky Colonel" by the Commonwealth of Kentucky for his contributions in the development of the Illinois/Kentucky Ohio River Civil War Heritage Trail. He loved playing his guitars, enjoyed riding his bicycle, and traveling. Steve was devoted to his community, always lending a helping hand to friends and neighbors. As a true public servant and pillar in the community, Steve was rightfully awarded the National Jefferson Award in 2016, which honored ordinary people who do extraordinary things. With his wealth of knowledge, many stories and charismatic personality that endeared him to many, Steve will never be forgotten. He was loved by many and will be sorely missed by all. Memorials in his honor may be made to Coles County Historical Society, PO Box 1398, Mattoon, IL 61938 or Coles County Animal Shelter, 6818 North County Road 1120 E, Charleston, IL 61920. Please visit www.mitchelljerdan.com or www.facebook.com/mitchelljerdanfuneralhome to light a virtual candle in his honor or share a memory with the family.

The family of Stephen A. Thompson created this Life Tributes page to make it easy to share your memories.

Stephen A. Thompson, age 69 of Mattoon, IL passed away on Jul...

Send flowers to the Thompson family.