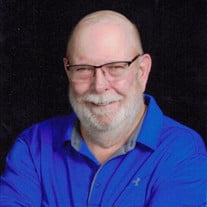 Stephen “Steve” Carter Ballinger I, age 74 of Mattoon, IL passed away at 1:45 PM, July 7, 2021, at Sarah Bush Lincoln Health Center in Mattoon, IL. A funeral service in his honor will be held at 10:00 AM, Monday, July 12, 2021, at First Christian Church, 1600 Wabash Avenue, Mattoon, IL 61938. Reverend Steve Morgan will officiate. A committal service will follow at Bethel Cemetery in Lafayette Township, IL. Military Rites will be conducted by Mattoon VFW Post 4325. Mitchell-Jerdan Funeral Home, 1200 Wabash Avenue, Mattoon, IL 61938 is in charge of services. A visitation will be held from 4:00 PM to 7:00 PM, Sunday, July 11, 2021, at the church. Masonic Rites will be presented by the Mattoon Masonic Lodge #260 following the visitation at 7:00 PM. Steve was born on October 1, 1946, in Mattoon, IL to the late Leonard Carter “Dutch” and Margaret Fern (Furry) Ballinger. He married Cheryl A. Storm on June 27, 1976, in Mattoon, IL; she survives. He is also survived by two daughters, Cheri L. Coffman of Springfield, IL, Lisa M. Ballinger of Mattoon, IL, one son, Stephen Carter Ballinger II and wife Kyla of Mattoon, IL; five grandchildren: Anthony G. Coffman and wife Katie of Starkville, MS, Gregory D. Coffman and wife Monica of Tampa, FL, Kimberly M. Coffman of Springfield, IL, Carter T. Ballinger of Mattoon, IL, Callyn A. Ballinger of Mattoon, IL. He was preceded in death by one grandson, Garrison D. Ballinger-Coffman. Steve was a proud veteran of the Vietnam War, having served his country in the United States Air Force. After his honorable discharge from the Air Force, Steve started his longstanding career for over thirty years at Mattoon Street Department and was previously employed by Young Radiator for thirteen years. An active member of First Christian Church of Mattoon, IL Steve served as Deacon and Trustee for the church. He had a strong faith and took every opportunity to be thankful for his many blessings in his life. Throughout the years, he held memberships for various lodges and organizations within the community: Masonic Lodge at Wabash #179 A.F. & A.M., Corn Belt Shrine Club of Coles County, Ansar Shriners of Springfield, IL, Mattoon Exchange Club, American Legion of Mattoon, IL, and Mattoon VFW Post 4325. Steve was immensely instrumental and devoted to Boy Scouts of America and was an Assistant Troop Leader to Boy Scout Troop 152 and Advanced Committee Chairman for Lincoln Trails District. While Steve dedicated his time to others, his favorite times, however, were spent with his children and grandchildren on the family farm, where fond memories were made. His devotion to his family and friends was paramount in his life and he was happiest when surrounded by loved ones. Steve will be greatly missed and lovingly remembered. Memorials in his honor may be made to Shriners Hospital for Children, 4400 Clayton Avenue, St. Louis, MO, 63110. Please visit www.mitchell-jerdan.com or www.facebook.com/mitchelljerdanfuneralhome to light a virtual candle in his honor or share a memory with the family.

The family of Stephen "Steve" Carter Ballinger I created this Life Tributes page to make it easy to share your memories.

Send flowers to the Ballinger family.