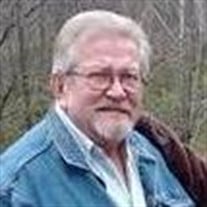 Stephen “Steve” A. Sharp, age 72 of Mattoon, IL passed away at 8:38 A, Friday, June 28, 2019 at his residence. A visitation will be held Friday, July 5, 2019 from 12:00 PM until 1:00 PM at Mitchell-Jerdan Funeral Home, 1200 Wabash Avenue, Mattoon, IL 61938. A graveside service will be held immediately after at Resthaven Memorial Gardens in Mattoon, IL; Pastor Ron Dickinson will officiate. Steve was born on August 19, 1946 in Lyndon Station, WI the son of Everett and Margaret (Rodeck) Sharp. He married Deborah J. Kelly in Mattoon, IL on December 23, 1971; she passed away December 12, 2016. He is survived by his two daughters, Marnie Maguire and husband Mike of Mattoon, IL, Marcie Miner and husband Mark of Humboldt, IL; four grandchildren, Merissa Zobrist of Highland, IL, Danielle Lawrence of Mattoon, IL, John Maguire of Mattoon, IL, and Dylan Miner of Humboldt, IL; four great-grandchildren, Chase Sawyer of Mattoon, IL, Elexya Zobrist of Highland, IL, Rayden Maguire of Mattoon, IL, and Madalyn Ramsey of Mattoon, IL; and one sister, Nancy Strong of Mattoon, IL. He is preceded in death by his parents, wife, and one brother, Everett Sharp. Before his retirement from Rural King, Steve was employed by Young Radiator in Mattoon, IL and Trailmobile in Charleston, IL. He was a member of Mattoon Eagle’s Club and Sons of the American Legion. He was a loyal and devoted husband, father, and grandfather. Steve enjoyed nothing more than spending time with his family and beloved dog Roxy. He will be greatly missed by all that knew him. Please visit www.mitchell-jerdan.com or www.facebook.com/mitchelljerdanfuneralhome to light a virtual candle in his honor or share a memory with the family.

The family of Stephen "Steve" A. Sharp created this Life Tributes page to make it easy to share your memories.

Send flowers to the Sharp family.