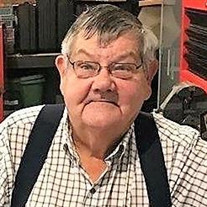 Stephen L. Patterson, 66, of Lerna, IL succumbed to his battle with cancer at home surrounded by his family on March 2, 2018. The funeral service in his honor will be held at 2:00 P.M., Wednesday, March 7, 2018 at Mitchell-Jerdan Funeral Home, 1200 Wabash Avenue, Mattoon, IL with Pastor Josh Butler officiating. Burial will immediately follow at Dodge Grove Cemetery in Mattoon, IL. The visitation will be from 12:00 P.M. until the time of service at the funeral home. Steve is survived by his wife, Debbie of 46 years; one son, Cory L. Patterson and his wife Wendy of Lerna, IL; one daughter, Kristy L. Cervantes and her husband Mike of Mahomet, IL; one brother, Robert E. Patterson of Jacksonville, FL; one sister, Jane A. Washburn and her husband Bill of Tyler, TX; four loving grandchildren, Haley L. and Andrew M. Cervantes of Mahomet, IL, Collin L. Patterson and Logan D. Adams of Lerna, IL; as well as nieces, nephews and extended family. Steve was a loving father, husband, grandfather and friend to all. Steve was preceded in death by his parents, Georgia and Lorenzo Patterson of Mattoon, IL as well as by his mother and father-in-law, Darrell and Joan Elder of Villa Grove, IL. Steve graduated from Mattoon High School in 1971 and married Debbie J. Elder on November 4, 1972 in Villa Grove, IL. He retired from General Electric Lamp Plant in Mattoon, IL after 30 years of service. Steve loved creating memories with his family, especially his grandchildren and would light up when they were around. He also enjoyed watching NASCAR and St. Louis Cardinal's baseball. He liked to mow, spend time with his dogs and work on various projects with his hands. Steve was a great provider to all his family, very kind-hearted and very supportive of law-enforcement and the United States Military. He will be missed greatly by all who knew him. The family would like to express their thanks to Sarah Bush Lincoln Hospice and Cancer Center in Mattoon, IL for their care and support. Also thank you to Mitchell-Jerdan Funeral Home for all of the arrangements. Memorials in his honor may be made to Sarah Bush Lincoln Cancer Center, 1000 Health Center Drive, Mattoon, IL 61938. Please visit www.mitchell-jerdan.com or www.facebook.com/mitchelljerdanfuneralhome to light a virtual candle in his honor or share a memory with the family.

Stephen L. Patterson, 66, of Lerna, IL succumbed to his battle with cancer at home surrounded by his family on March 2, 2018. The funeral service in his honor will be held at 2:00 P.M., Wednesday, March 7, 2018 at Mitchell-Jerdan Funeral Home,... View Obituary & Service Information

The family of Stephen L. Patterson created this Life Tributes page to make it easy to share your memories.

Stephen L. Patterson, 66, of Lerna, IL succumbed to his battle...

Send flowers to the Patterson family.