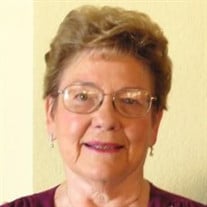 Sibyl Evon Etchason (Oder), born January 9, 1933 in Mason Township, Effingham County, Illinois, passed away May 27, 2021 at her home in Mattoon, Illinois with her daughter and son by her side. A celebration of her life will be held Saturday, October 23, 2021, at First Presbyterian Church, 10 Charleston Avenue, Mattoon, IL; Reverend Matthew Froeschle will officiate. The visitation will be held at 10:00 AM and services thereafter. A luncheon for friends and family will provided after the services. Mitchell-Jerdan Funeral Home is charge of arrangements. She was preceded in death by her husband of fifty-eight years H. Carl Etchason, parents, Chester Raleigh Oder and Lola Iva Oder (Krohn) and eight brothers and sisters: Daniel Durland Oder, Gerald Guy Oder, Roger Keith Oder, John Mirl Oder, Lyle Deane Oder, Betty Jeanne Wagoner, Howard Wayne Oden, and Lawrence Gehl Oder. She was a loving mother to Susan (James) Hoppe of Missouri City, Texas, and Tom (Christine) Etchason of Park Ridge, Illinois. She was a devoted grandparent of five grandchildren: Kelsey, Andrew and Brooke Hoppe and Jack and Jill Etchason. She was the last surviving sibling of her family and was the matriarch to many nieces and nephews. Sibyl graduated from Altamont High School in 1950 and attended Business and Secretarial School in St. Louis, Missiouri after graduation. Sibyl was a secretary in law offices in Mattoon and eventually the Administrative Secretary to the Chief Circuit Judge, starting in Charleston and for many years working in Paris, Illinois. She was an active member of The First Presbyterian Church of Mattoon, serving most recently on the session. She gave generously of her time to her church and cared deeply for the youth group that influenced her children’s lives. After her retirement in 1992 she and her husband traveled extensively throughout seventy-two countries and wintered in Florida, to be near the spring training games of her beloved St. Louis Cardinals. Please visit www.mitchelljerdan.com or www.facebook.com/mitchelljerdanfuneralhome to light a virtual candle in her honor or share a memory with the family.

Sibyl Evon Etchason (Oder), born January 9, 1933 in Mason Township, Effingham County, Illinois, passed away May 27, 2021 at her home in Mattoon, Illinois with her daughter and son by her side. A celebration of her life will be held Saturday,... View Obituary & Service Information

The family of Sibyl Evon Etchason created this Life Tributes page to make it easy to share your memories.

Send flowers to the Etchason family.