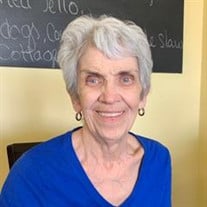 Shirley Ann Tyler, age 77 of Mattoon, IL passed away at 8:10 PM Friday, February 19, 2021 at Odd Fellow-Rebekah Home in Mattoon, IL. Private family services in her honor will be held at a later date. Mitchell-Jerdan Funeral Home, 1200 Wabash Avenue, Mattoon, IL 61938 is in charge of arrangements. Shirley was born July 4, 1943 in Paris, IL to the late Palmer Wilson and Janice Naddlay (Hanner) Allison. She is survived by one daughter, Kim Jones and husband Tom of Rock Spring, GA; one son, W. Lee Johnson and wife Marty of Alpine, UT; one brother, Walter Allison and wife Diane of Catlin, IL; six grandchildren, Allison Gibbons and husband Doug of Green Bay, WI, Andrew Jones of Mattoon, IL, Dallin Johnson and wife Bri of Spanish Fork, UT, Damon Johnson and wife Shayla of Glendale, AZ, Hailee Johnson of St. George, UT, Maloree Hallman of Alpine, UT; and seven great-grandchildren. She was preceded in death by one brother, David Allison. In 2009 Shirley retired from Sarah Bush Lincoln Health Center in Mattoon, IL after many dedicated years of service. Previously she worked for Paris Community Hospital in Paris, IL as Director of Nursing; A P & S Clinic in Terre Haute, IN; and Zenith Manufacturing in Paris, IL. An expert in her field she also served as a Legal Nurse Consultant and specialized as a Wound, Ostomy and Continence Nurse. During her career, Shirley had the pleasure of taking many nurses under her wing to guide and train. Shirley was a member of Order of the Eastern Star of Illinois, Mattoon, IL. The true heart of a mom and grandma, Shirley’s highest priorities and greatest moments were spent making memories with her family. She will be greatly missed, and fondly remembered. Please visit www.mitchell-jerdan.com or www.facebook.com/mitchelljerdanfuneralhome to light a virtual candle in her honor or share a memory with the family.

The family of Shirley Ann Tyler created this Life Tributes page to make it easy to share your memories.

Send flowers to the Tyler family.