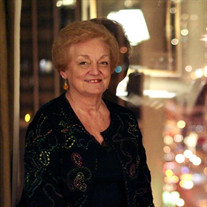 Shirley L. Herrington, age 79 of Mattoon, IL passed away at 8:30 AM, Tuesday, February 18, 2020 at Good Samaritan Hospital in San Jose, CA. A funeral service in her honor will be held at 1:00 PM, Saturday, February 29, 2020 at Mitchell-Jerdan Funeral Home, 1200 Wabash Avenue, Mattoon, IL 61938; Reverend Ron Dickinson will officiate. A committal service will immediately follow in Dodge Grove Cemetery. The visitation will be held from 10:00 AM until the time of the service at the funeral home. Shirley was born on September 21, 1940 in Tuscola, IL, the daughter of the late James R. and Leffel (Elmore) Livesay. She married David A. Herrington on February 5, 1961. She later married Edward J. Fuesting on May 11, 1985 in Mattoon, IL; he passed away on April 8, 1998. She is survived by her son, David A. Herrington II and his wife Jeannette M. Shelton; and a grandson, William “Liam” Shelton Herrington, who reside in San Jose, CA; and one brother, J.R. Livesay II and his wife Pam of Mattoon, IL. Shirley is preceded in death by one daughter, Angela K. Herrington. Shirley was a graduate of the University of Illinois in Champaign-Urbana, where she was an active member of the Chi Omega sorority and remained a loyal fan and supporter of the Fighting Illini Football program. She was a certified public accountant, officer, and treasurer for Mattoon Broadcasting Company and the Cornbelt Broadcasting Company, which owned multiple radio stations in Illinois, Ohio and Florida. She was a life-long member of Central Community Church of Mattoon, IL and long-time church secretary and treasurer. Shirley was an avid bridge player in local bridge groups and in competitive tournaments throughout Illinois, earning her Masterpoints from the American Contract Bridge League. She enjoyed traveling, having seen the world on cruise ships, and she cherished spending time with her family, especially her grandson Liam. Shirley will be lovingly remembered. Memorials in Shirley’s honor may be made to Alzheimer’s Association Illinois Chapter, 8430 West Bryn Mawr Avenue #800, Chicago, IL 60631. Please visit www.mitchell-jerdan.com or www.facebook.com/mitchelljerdanfuneralhome to light a virtual candle in her honor or share a memory with the family.

Customized sympathy cards. Mailed for you.