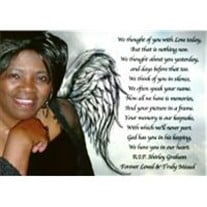 Mattoon, IL-Shirley Jean Graham, age 65, of Mattoon, IL, passed away at 10:31 p.m., Saturday, December 10, 2011. \r\n\r\nThe funeral service in her honor will begin at 11:00 a.m., Thursday, December 15, 2011, at Mitchell-Jerdan Funeral Home, 1200 Wabash Avenue, Mattoon, IL 61938. Bishop Sylvester E. Calvin from the House of Miracles Center in Chicago will officiate. Visitation will be held Wednesday evening from 7:00-10:00 p.m., at Mitchell-Jerdan Funeral Home. A graveside service will later be held in Jackson, MS, at the Autumn Woods Cemetery. \r\n\r\nBorn April 23, 1946, in Hollandale, MS, Shirley was the daughter of the late Willie and Essie (Fenderson) Calvin. She married her former husband, Lee Edward Graham in 1961. He survives. She leaves four children: John Kennedy Graham,Edward Foster- Graham, William Anthony Graham, and Seniece Ann Graham; her long life love, Louis Calvin; four brothers: Willie A. Calvin, Willie B. Calvin, William Calvin, and Eugene Calvin; 3 sisters: Dianne Coleman, Willie Mae Calvin, and Ethaline Walker; special nieces and nephews: Christopher Calvin, Kea Calvin, Kyra Calvin-Holman, and Tiffany Payton. She also leaves her boyfriend, Robert Horath, and a host of grandchildren and God-children including two special God-sons, Phillip Joyner and Nicholas Jefferson. Shirley was preceded in death by her parents; her step-mother, Anna Mae Calvin; and a sister-in-law, Linda Calvin. \r\n\r\nFor the last eleven years, Shirley had worked for Mattoon Health Care where she was loved by the staff and residents and had been named Housekeeper of the Year and Employee of the Month. Another role that she took on with great pride and responsibility was that of a Human Rights Activist for Coles County. Family and friends were treasures to Shirley, and she cherished time spent with them. She was loved by many and losing her has made a tremendous impact on them all. Shirley was one of God's many angels sent here to teach, touch, and love. \r\n\r\nMemorial contributions in her honor may be made to the First-Mid Illinois Bank and Trust in her name. \r\n\r\nPlease visit www.mitchell-jerdan.com to light a virtual candle in her honor or share a memory with her family.\r\n

The family of Shirley Jean Graham created this Life Tributes page to make it easy to share your memories.

Send flowers to the Graham family.