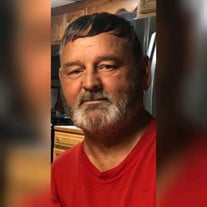 Scott Alan Wishard, age 57 went home to be with his heavenly Father on June 28, 2021 at Carle Foundation Hospital in Champaign, Illinois. A funeral service will be held at 10:00 AM Tuesday, July 6,2021, at the First Christian Church, 1600 Wabash Avenue, Mattoon, IL 61938; Reverend Steve Morgan will officiate. Interment will immediately follow in Upper Muddy Cemetery in Lerna, IL. The visitation will be Monday evening, July 5, 2021, from 5:00-8:00pm at the First Christian Church. Mitchell-Jerdan Funeral Home, located at 1200 Wabash Avenue, Mattoon, IL 61938 is in charge of the services. Scott was born August 26, 1963, in Mattoon, Illinois to Betty Joan West and the late Maldon Cletcher Wishard. He married the love of his life, “Dolo” A. Mielke in Benton, Illinois on December 31, 1988. He is survived by his wife, Dolo Wishard of Mattoon, IL; Six children: Brittany A. Wishard of Mattoon, IL, Jacob Wishard and wife Madison of Springfield, MO, Drew A.D. Wishard and wife Cassandra of Mt. Vernon, AL, Lucas Z. Wishard of Charleston, IL, Ken P. Wishard of Mattoon, IL, and Tony A. Wishard and wife Tiffany of Mattoon, IL.; Seven grandchildren: Jacob, Anabelle, and Logan Rodriguez of Mattoon, IL, Connor Winters of Republic, MO, Madison Kay and Sophie Grace Wishard of Springfield, MO, Cooper Wishard of Mt. Vernon, AL; His mother, Joan Pilkerton of Mattoon, IL; Four Brothers: Randy Wishard and wife Becky of Mattoon, IL, Doug Wishard and wife Peggy of Mattoon, IL, Chuck Stuckey of Poland, IN, and Wes Stuckey and fiancee Billie of Morrisville, IN; and Two Sisters: Brenda Logan and husband Charles of Mattoon, IL, and Kelly Carlyle and husband Guy of Morrisville, IN. He was preceded in death by his son, Donnie I. Wishard, his father Maldon Cletcher Wishard, and maternal grandparents Robert and Dorothy West. Scott enjoyed spending time with his family. He was especially excited to support his wife in the opening of Wishard’s Fit to a Tee. He could always be found by her side encouraging her. He was always her biggest supporter in every adventure. Scott was a man of faith who put trust in God when faced with many obstacles throughout his life. He was a dedicated and devout member of the First Christian Church in Mattoon, IL. Along with his wife, Scott found peace and fellowship with his church family. Scott graciously provided his time helping those in need and doing what needed to be done for the greater good. He was the man behind the scenes who never wanted credit for his good will. Scott was a loving husband, father, and papa; his grandchildren were the light of his life. He loved taking care of his dear Brittany. His presence will be missed by many. His life here on Earth has come to an end, but we have peace knowing his eternal life has begun in Heaven. Dust to dust and ashes to ashes his body will be committed back to God. Memorials in Scott’s honor may be made to the First Christian Church. Please visit www.mitchell-jerdan.com or www.facebook.com/mitchelljerdanfuneralhome to light a virtual candle in his honor or share a memory with the family.

Scott Alan Wishard, age 57 went home to be with his heavenly Father on June 28, 2021 at Carle Foundation Hospital in Champaign, Illinois. A funeral service will be held at 10:00 AM Tuesday, July 6,2021, at the First Christian Church, 1600... View Obituary & Service Information

The family of Scott Alan Wishard created this Life Tributes page to make it easy to share your memories.

Scott Alan Wishard, age 57 went home to be with his heavenly...

Send flowers to the Wishard family.