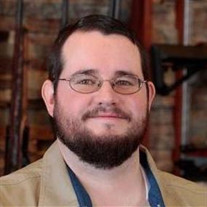 Scott Wayne Johnston Austell Ga. -Scott Wayne Johnston age 32 was called to Heaven at 10:31 p.m. Monday August 24, 2015, due to injuries sustained from an automotive accident. Scott was full of life and he loved his wife Keri and sons Rowan and Colton. Memorial Services will be held at 11 a.m., Saturday September 26 at Mitchell-Jerdan Funeral Home, located at 1200 Wabash Avenue, Mattoon, IL 61938 with Pastor Jason Martin officiating. Visitation is from 9 a.m. until the Memorial Service begins. The son of Doug and Yvonda Johnston, he was born November 23, 1982 in Mattoon . Scott is survived by his wife and the love of his life Keri, and their two sons, Rowan (5 yrs) and Colton (3 months); Other survivors include his parents Doug and Yvonda Johnston of Mattoon; Two Brothers Corey Johnston and wife Heather of Waukegan, IL, and Dillon Johnston of Mattoon; Grandmother Lucy Perkins of Mattoon, IL; Grandparents Wayne and Fern Johnston of Neoga, IL; Aunts, Uncles, and many cousins. Scott was the General Manager at Liberty Guns in Acworth, GA where he loved building guns, and teaching others about firearms. Scott was thought of very highly in the gun community, and always ensured others purchased the right firearm to meet their needs. Scott also had a love for cars, as displayed by his son Rowan’s ability to name any car as it passes on the road. He was an Eagle Scout in Boy Scouts and awarded Vigil Honor from the Order of the Arrow. He wanted his boys to earn the same honors as he had. Scott was a 2001 Graduate of Mattoon High School where he was a member of the Marching Band Drum line, and the JROTC. He also held a great love for his church and church family. His love for God and Jesus was unending, and he wanted everyone to share in that love. He will be greatly missed by many He was preceded in death by his Grandfather Junior Scott, or “Popeye” as Scott called him. He was followed in death by his Step-Grandfather, Bill Perkins a week later. In lieu of flowers donations can be made toward his sons' education fund. Please visit www.mitchell-jerdan.com or www.facebook.com/mitchelljerdanfuneralhome to light a virtual candle in his honor or share a memory with his family.

Scott Wayne Johnston Austell Ga. -Scott Wayne Johnston age 32 was called to Heaven at 10:31 p.m. Monday August 24, 2015, due to injuries sustained from an automotive accident. Scott was full of life and he loved his wife Keri and sons Rowan... View Obituary & Service Information

The family of Scott Wayne Johnston created this Life Tributes page to make it easy to share your memories.

Send flowers to the Johnston family.