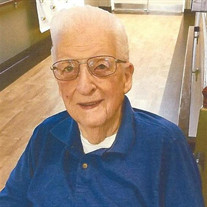 Samuel H. Irwin, Jr., age 90, passed away at 2:49 A.M. on Monday, October 30, 2017 at Mattoon Rehabilitation and Health Center. Mitchell-Jerdan Funeral Home, located at 1200 Wabash Avenue, Mattoon, IL 61938, is assisting the family with arrangements. Sam was born on October 22, 1927 in Ridgway, PA, the elder son of Samuel, Sr., and Helen F. Irwin. On October 22, 1949, Sam married Dorothy Stelmach, of Pasadena, CA, in Ridgway, PA. She preceded him in death on February 28, 2016. Sam is survived by his children: Steven Irwin of North Kansas City, MO; Debra (Robert) Grierson and Cindy Reyes (David) Pruitt of Mattoon, IL. Also surviving are four grandchildren: Tim (Susan Stoebner) Grierson of Los Angeles, CA; Lisa (Tony) Amstutz of Panama City, Panama; April (Nick) Smith and Jordan Reyes, all of Mattoon, IL, as well as six great-grandchildren: Chloe, Carson, Camilla and Coralynn Amstutz of Panama City, Panama; Abel and Harper Smith of Mattoon, IL. He is also survived by a sister-in-law and brother-in-law Darlene and DuWayne Strom of MN, and several nephews, nieces, and cousins. Sam was predeceased by his parents, wife, brother and sister-in-law Dick and Joan Irwin, sister-in-law and brother-in-law Jacque and Mart Hodnett, and numerous aunts, uncles, and cousins. He retired in 1992 after more than forty years in the trucking industry. He served his country in the U.S. Army Air Corps during WWII, participating in the Berlin Air Lift. He was a member of the First Presbyterian Church of Mattoon, IL, the Exchange Club of Mattoon, IL, American Legion Post 88 of Mattoon, IL and was fifty year member of the Masons. Per Sam’s wishes, cremation rites will be accorded and a memorial service and burial will be at a later date. Memorials in his honor may be made to the First Presbyterian Church, 10 Charleston Avenue, Mattoon, IL 61938 or Mattoon Community Food Center, 600 Moultrie Avenue, Mattoon, IL 61938. Please visit www.mitchelljerdan.com or www.facebook.com/mitchelljerdanfuneralhome to light a virtual candle in his honor or share a memory with the family.

The family of Samuel H. Irwin Jr. created this Life Tributes page to make it easy to share your memories.

Send flowers to the Irwin family.