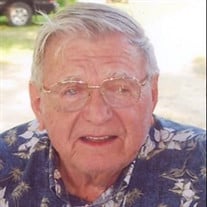 Dr. Samuel E. Clem Jr. Mattoon, IL-Dr. Samuel “Sam” E. Clem Jr., age 87 of Mattoon, IL passed away on Saturday, September 2, 2017 at the Champaign-Urbana Nursing and Rehabilitation Center in Savoy, IL at 9:36 P.M. Services celebrating his life will be held at 10:00A.M., Saturday, September 9, 2017 at Mitchell-Jerdan Funeral Home, 1200 Wabash Ave., Mattoon, IL, 61938 with Reverend Brad Brown officiating. Interment will follow the services at Beals Cemetery in Trilla, IL. Military rites will be conducted by the Mattoon VFW Post # 4325 at the graveside. Visitation will be held from 5:00-7:00 P.M., Friday, September 8, 2017 at Mitchell-Jerdan Funeral Home. Sam was born on August 20, 1930 in Neoga, IL, the son of Samuel E. and Elsie J. (Storm) Clem Sr. He married Joana Sue Morgan on February 11, 1955 in Corinth, MS. He is survived by Sue Clem of Mattoon, IL, his loving wife of sixty two years; five children, Jacquelyn M. Green of Atlanta, GA, Karla S. Coleman and her husband Mark S. of Mattoon, IL, Dr. Gregory E. Clem and his wife Leslie L. of Springfield, IL, Scott A. Clem and his wife Stephanie S. of Rowlett, TX and Lisa A. Cotter and her husband Timothy J. of Shavertown, PA; fourteen grandchildren, Allison E. Green of Washington D.C., Jennifer N. Green of St. Louis, MO and her fiancé Andrew Wilson, Patrick C. Green of Houston, TX, Kaitlyn M. Coleman of Mattoon, IL, Jordan D. Coleman of Mattoon, IL, Morgan A. Clem of Glendale, AZ, Madison S. Clem of Chicago, IL, McGwire G. Clem of Springfield, IL, Kiana M. Clem of Ft. Smith, AR, Kendall E. Clem of Rowlett, TX, Kyle E Hamilton of Shavertown, PA, Trey J. Cotter of Mattoon, IL, Cameron R. Cotter of Louisville, KY and Tristen S. Cotter of Shavertown, PA; special niece, Ellen K. Hall and husband Les of Tuscola, IL and their children and grandchildren. He was preceded in death by his parents and two sisters; Gabriella Wilson and Kay Kimery. Sam was the owner and operator of the Mattoon Animal Hospital for over fifty years. He received his Bachelor’s degree in Veterinary Medicine in 1958 and his Doctorate of Veterinary Medicine in 1960, both from the University of Illinois in Champaign, IL. Honorably, he served our Nation in the U.S. Army during the Korean Conflict. He was a member of the American Veterinary Medical Association, Coles County Rabies Administrator and involved with the Coles County Animal Shelter for several years. He had a passion for fishing, a pastime he kept active for over seventy years. Along with being a University of Illinois alumnus he was a dedicated U of I Football and Basketball fan. Sam’s greatest love was for his wife and family. He was very proud of his children and their accomplishments. Sam was a loving grandfather to his fourteen grandchildren and one of his greatest joys was to encourage and delight in them. He will leave an unfillable hole in their lives and will be forever missed. In remembrance of his love of the University of Illinois, friends and family are encouraged to wear Orange and Blue clothing for the visitation. Memorials may be made to the American Heart Association, 2141 W. White Oaks Drive, Suite A, Springfield, IL 62704 or University of Illinois Athletics, 1700 South Fourth St., Champaign, IL 61828 Please visit www.mitchell-jerdan.com or www.facebook/mitchelljerdanfuneralhome to light a virtual candle in his honor or share a memory with the family.

The family of Dr. Samuel E. Clem Jr. created this Life Tributes page to make it easy to share your memories.

Send flowers to the Clem family.