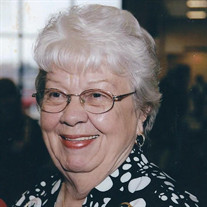 Sally M. Smith, age 84 of Mattoon, IL peacefully passed with loved ones by her side at 1:52 P.M., Thursday, January 3, 2019. A memorial service in her honor will be held from 4:30 P.M.-7:00 P.M., Wednesday, January 9, 2019 at LifeSpan Center, 11021 E. Co Rd 800 N, Charleston, IL 61920. Mitchell-Jerdan Funeral Home is assisting the family with arrangements. Sally was born December 20, 1934 in Arcola, IL the daughter of Howard R. Sr., and Sylvia V. (Burch) Harris. On June 2, 1956 she married Joseph A. Heuerman in Teutopolis, IL. She later married Richard W. Smith on January 30, 1981 in Urbana, Il; he survives. Other survivors include her beloved children; Debra Edwards and husband Steve of Arcola, IL, Kathryn “Kathy” Pullen of Humboldt, IL and Linda McCowen and husband Andrew of Fort Riley, KS; seven grandchildren; seven great-grandchildren; two sisters, Margaret Butler of Hindsboro, IL, Janice Sylvester and husband Virgil of Mattoon, IL; one brother, Howard Harris Jr. and wife Jeanetta of Arcola, IL. She is preceded in death by her parents, one sister, and one son-in-law, Doug Pullen. Sally worked hard all of her life exploring many occupations. She loved quilting and made numerous beautiful quilts. Sally was a member of the Stephen A. Douglas Chapter of Daughters of the American Revolution, Illinois Genealogical Society, and the Blue Ridge Band of The Amonsoquath Tribe of Cherokee. She also served as a city council member of Arcola, IL for two terms. As a lifelong Democrat, she had a passion for politics and discussing important topics. Sally will be missed but not forgotten. Memorials in Sally’s honor may be made to Lincolnland Hospice of Sarah Bush Lincoln, 1004 Health Center Drive, Mattoon, IL. 61938. Please visit www.mitchelljerdan.com or www.facebook.com/mitchelljerdanfuneralhome to light a virtual candle in her honor or share a memory with the family.

The family of Sally M. Smith created this Life Tributes page to make it easy to share your memories.