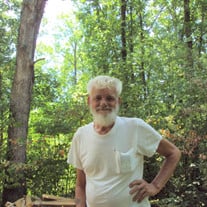 Ronald Eugene Hayes Sr., age 79 of Charleston, IL passed away Tuesday, November 24, 2020 at his residence. A memorial service in his honor will be held at a later date. Mitchell-Jerdan Funeral Home, 1200 Wabash Avenue, Mattoon, IL 61938 is in charge of services. A man of few words, Ronald made each one count and made sure what he said was worth the listener’s time. Born February 23, 1941 in Ashmore, IL the son of Bertha Chrysler (Matheny) Hayes and Allen Faye Hayes; Brother to Charles, Darrell, Richard, Barbara, Russell, Sharon, Rex, Henry, Jerry, and Larry; Husband to Dolores Oralia Cardona (Valdespino) Hayes; Father to Ron, Jeannie, Roger, Elizabeth, and Kathy; Grandfather to Staci, Andrea, Alexis, Samantha, Austin, Holden, Mike, Jr., Ellis, Levi, April, and Johnny; Great-grandfather to Cayden, Jordan, Chloe, Ollie Moon, Dylan, Emiah, Gunner, Tinleigh, Mikyiah, Adeline, and William. “Pops” and “Dad” to so many who loved, respected, and appreciated him as if they were his own. Most at home in the woods, trekking up and down hills and hollers, hunting mushrooms and ginseng; on a river bank waiting for a monster catfish to put up a good scuff; driving on deserted country roads, looking to get lost listening to Willie’s Roadhouse on the radio, reminiscing about the first time he heard that old country tune; sitting in his recliner reading Louis L’Amour or some other western; planting thousands of gorgeous flowers; feeding the birds who flocked to him; and playing twenty thousand, pitch, penny-ante, dominoes, or any other game. Ronald loved his family dearly and tried to share the best and most beautiful parts of the world he knew with each one of them. A service-related disabled Army and Naval Reserve veteran who gave eighteen years to our country. Ronald valued the work of the Disabled American Veterans, Veterans of Foreign Wars, and American Legion. In lieu of flowers, do something to support a vet, plant something beautiful, hunt or fish for food you can share and enjoy with others, look for the hidden places and people in this world and cherish them. Wanting his friends and family to remain safe, he has put up a freezer full of catfish. When the pandemic is over and it is safe to gather, he hopes there will be a great fish fry with mushrooms, frog legs, ripe tomatoes, and juicy watermelon. “When I die, remember that what you knew of me is with you always. What is buried is only the shell of what was. Do not regret the shell, but remember the man. Remember the father.” – Louis L’Amour, Last of the Breed “Do not let yourself be bothered by the inconsequential. One has only so much time in this world, so devote it to the work and the people most important to you, to those you love and things that matter. One can waste half a lifetime with people one doesn't really like, or doing things when one would be better off somewhere else.” - Louis L’Amour, Ride the River Please visit www.mitchell-jerdan.com or www.facebook.com/mitchelljerdanfuneralhome to light a virtual candle in his honor or share a memory with the family.

Ronald Eugene Hayes Sr., age 79 of Charleston, IL passed away Tuesday, November 24, 2020 at his residence. A memorial service in his honor will be held at a later date. Mitchell-Jerdan Funeral Home, 1200 Wabash Avenue, Mattoon, IL 61938 is... View Obituary & Service Information

The family of Ronald E. Hayes Sr. created this Life Tributes page to make it easy to share your memories.

Send flowers to the Hayes family.