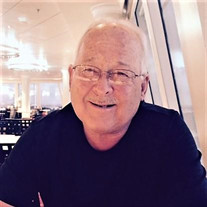 Mattoon, IL – Ronald “Ron” L. Bateman, age 66, of Mattoon, IL, passed away at 11:58 p.m., Saturday, January 7, 2017, at Sarah Bush Lincoln Health Center. The funeral service in his honor will begin at 10:00 a.m., Friday, January 13, 2017, at Mitchell-Jerdan Funeral Home, 1200 Wabash Avenue, Mattoon, IL, 61938. Reverend Josh Butler and Reverend Jeremy Morton will officiate. Burial will follow in Dodge Grove Cemetery. Visitation will be held at the funeral home, Thursday evening, 5:00-8:00 p.m. Born November 2, 1950, in Vincennes, IN, Ron was the son of Forrest “Frosty” L. and Betty J. (Wheatley) Bateman. His mother survives in Mattoon, IL. He married Karen A. Cox on October 18, 1969, in Mattoon, IL. She survives and resides in Mattoon, IL. Other survivors include their children, Ron Bateman, Jr. of Mattoon, IL, and Amy Bateman of Lerna, IL; one sister, Jeanie May and husband Ken of Marietta, GA; four grandchildren, Jacob Brigham of Evansville, IN, Bailey Brigham of Lerna, IL, and Kennedy Bateman of Mattoon, IL, and Korbin Bateman of Mattoon, IL; one aunt, Mary Armentano of Evansville, IN; a daughter-in-law, Blythe Bateman of Mattoon, IL; several nieces and nephews; and his first great-grandchild on the way. He also leaves his beloved canine companion, Reggie. Ron was a member of the First United Methodist Church of Mattoon. He was employed as the manager of Lambo’s BP. Previous employment included Downtown Ford where he worked as a sales representative, Platolene 500 where he served as District Supervisor and Frosty’s Platolene where he was a co-manager with his father, Frosty. Ron was a 1968 graduate of Mattoon High School where he was active in band, football, and baseball. He played Little League and Babe Ruth. His love of sports, especially baseball carried over into his adulthood. He continued to play on adult baseball leagues until his mid 40’s. He coached JFL, girls’ softball, and baseball; and supported his children and grandchildren in all of their extra-curricular activities. He was an avid fan of the Chicago Bears, and especially the Illini and the Chicago Cubs. He was thrilled to see the Cubs win the World Series on his birthday and was known to always wear Cubs Blue or Illini Orange. Ron also had an affinity for street rods that he shared with his son and grandson. He planned to restore his 1948 Ford truck upon his approaching retirement. Also an outdoorsman, Ron loved fishing and camping in his RV. Ron was passionate about his work; was an athlete, coach and sports fan; was a car enthusiast; and could be described with many endearing labels; however, the role that was closest to his heart was that of a husband, father, and grandfather. He cherished his family more than anything, and they cherished him. Memorials in his honor may be made to Camp New Hope, 1364 County Rd 100 E, Neoga, IL 62447 or the charitable organization of the donor’s choice. Please visit www.mitchell-jerdan.com or www.facebook.com/mitchelljerdanfuneralhome to light a virtual candle in his honor or share a memory with his family.

The family of Ronald L. Bateman created this Life Tributes page to make it easy to share your memories.

Send flowers to the Bateman family.