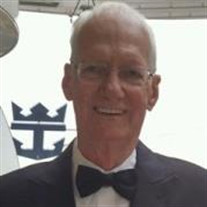 Mattoon, IL – Roger K Bathe, age 69, of Mattoon, IL, passed away at 12:49 p.m., Sunday, June 5, 2016, at his residence. The funeral service in his honor will begin at 10:00 a.m., Thursday, June 9, 2016 at First United Methodist Church, 1601 Charleston Ave, Mattoon, IL 61938. Pastor Kenneth Hutchens will officiate. Interment will follow in Oak Ridge Cemetery in Effingham IL. Visitation will be held Wednesday evening from 5:00-7:00 p.m., at Mitchell-Jerdan Funeral home, located at 1200 Wabash Avenue, Mattoon, IL. Born in Decatur Illinois on August 9, 1946, Roger was the son of Jesse and Marjorie (Kenney) Bathe. He married Sharyl Erickson on April 29, 2006, in South Carolina. Survivors include his loving wife, Sharyl of Mattoon, IL; one daughter, Shannon Bathe and Doug Fagan of Mattoon IL; one son, Shad and Kim Bathe of Shelbyville, IL,; Step-son Dennis Bluhm and wife Anita of OshKosh, WI; step-daughter Shari and husband Tom Magee of Mascoutah, IL; two brothers, Terry Bathe, and Dan and Vicky Bathe of Sullivan Il; two grandchildren, Lexi Bathe of Mattoon, and Kiefer Bathe of Shelbyville, IL; four step-grandchildren, Kevin and Brian Magee of Mascoutah, IL, Matthew and Ryan Bluhm of OshKosh, WI. Roger was preceded in death by his parents; one brother, Thomas Bathe; one sister Mable Ellen Bathe; and first wife Barbara Wheeler. Roger was former owner of Shelbyville IL Dairy Queen, which had the largest volume in the U.S. He also was owner of Yes Motors in Sullivan IL. Most recently he was co-owner of luvracin.com, which is the largest racing website in the nation, and features local racing. He was also an Aflac Associate. He was past president of the Shelbyville Jaycees, and was a Jaycees senator. He was also a member of the Shelbyville Masonic Lodge. Roger had a lifelong love for racing, having raced wingless sprint cars. He was known as “Racin Rog” by many throughout the United States. Among highlights in his life was Petty Racing Experience where he drove 3 MPH below NASCAR average speeds. A member First United Methodist Church, Roger’s faith was an important part of his life. His faith and his family were a source of comfort and strength. He adored his family and cherished time spent with them more than anything. Memorials in honor of Mr. Bathe may be made to Aflac Children’s Cancer Center 5455 Meridian Mark Rd #400, Atlanta, GA 30342 Please visit www.mitchell-jerdan.com or www.facebook.com/mitchelljerdanfuneralhome to light a virtual candle in his honor or share a memory with his family.

The family of Roger Kent Bathe created this Life Tributes page to make it easy to share your memories.

Send flowers to the Bathe family.