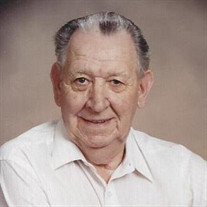 Mattoon, IL – Robert V. Pugsley, age 91, of Mattoon, IL, passed away at 7:55 a.m., Monday, February 08, 2016, at the Odd Fellow Rebekah Home. The funeral service in his honor will begin at 11:00 a.m., Thursday, February 11, 2016, at Mitchell-Jerdan Funeral Home, 1200 Wabash Avenue, Mattoon, IL, 61938. Reverend Thomas Skinner will officiate. Interment will follow in Roselawn Cemetery, Charleston, IL. Visitation will be held at the funeral home from 10:00 a.m. until the service begins. Born August 25, 1924, in rural Shelby County, IL, Robert was the son of Frank and Fae (Young) Pugsley. He married Elizabeth Mae Stevens on April 6, 1948 in Henderson, Kentucky. She passed away on May 19, 1997. Survivors include their daughter, Lee Ann Chezem and husband Scott of Danville, IL; one sister, Christine Sawyer of Lerna, IL; and a step-grandson, Ryan Chezem of Danville, IL. In addition to his wife, he was preceded in death by his parents; one brother, Charles Pugsley; and one sister, Lucille Turner. Mr. Pugsley served our country with the United States Army from 1943 to 1946, primarily stationed in England. Prior to retiring in 1988, he had been employed by Meadow Gold Dairy. Robert enjoyed trying his luck on River Gambling Boats and taking trips to Las Vegas, NV. He had an incredible green thumb and grew beautiful flowers and impressive vegetable gardens. He was especially proud of his heir loom pole beans and the device he built to grow and harvest them. Canning and sharing the results of his hard work made the effort worthwhile. Please visit www.mitchell-jerdan.com or www.facebook.com/mitchelljerdanfuneralhome to light a virtual candle in his honor or share a memory with his family.

The family of Robert V. Pugsley created this Life Tributes page to make it easy to share your memories.

Send flowers to the Pugsley family.