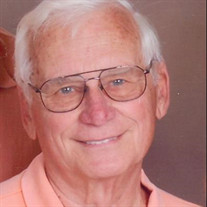 Robert Norman Plush, Sr., age 83, of Mattoon, IL, passed away July 14, 2017 at 5:00A.M. at Mattoon Health Center in Mattoon, IL, 61938, surrounded by his loved ones after a courageous battle with mesothelioma. The funeral service in his honor will begin at 10:00 A.M., Tuesday, July 18, 2017, at Immaculate Conception Catholic Church in Mattoon, IL. Father John Titus will officiate. Burial will follow in Calvary Cemetery, Mattoon, IL. Visitation will be held at Mitchell-Jerdan Funeral Home, 1200 Wabash Avenue, Mattoon, IL, 61938 Monday evening from 5:00-7:00 P.M., with a rosary service beginning at 4:30 P.M. Born July 17, 1933, in Chicago, IL, Robert was the son of Emil Plush and Mary R. (Pavlik) Plush. He married Gloria Margaret Krakora on September 3, 1960. She passed away October 26, 1983. He is survived by his three children; one daughter, Gloria J. Starwalt and husband Mark of Mattoon, IL; two sons, Robert Plush and Becky Jaeger of Mattoon, IL, and Ron L. Plush and wife Jill of Cincinnati, OH; one brother, Emil Roy Plush and wife Helen of Lady Lake, FL; one sister, Vivian Carol Boushelle of Crystal Lake, IL; eight grandchildren, Robert Bean of Mattoon, IL, Skyler Starwalt of Mattoon, IL, Satchel Starwalt of Mattoon, IL, Sawyer Starwalt of Mattoon, IL, Evan Plush of Mattoon, IL, Maggie Plush of Mattoon, IL, Kyle Plush of Cincinnati, OH, and Alli Plush of Cincinnati, OH; two great-grandchildren, Ivory and Vincent Bean of Mattoon, IL. He was preceded in death by his parents, one brother, one sister, and his wife. Mr. Plush served our country with the United States Army as a cryptographer. He was employed by R.R. Donnelley for 35 years, first in Chicago and then assisted with the startup of the Mattoon facility as Bindery Supervisor. Robert found pleasure taking walks at Douglas Hart Nature Center, traveling, and family vacations; however, his greatest joy was spending all his free time with his children and grandchildren. He will be dearly missed by all those whose lives he touched. Please visit www.mitchell-jerdan.com or www.facebook.com/mitchelljerdanfuneralhome to light a virtual candle in his honor or share a memory with his family.

Robert Norman Plush, Sr., age 83, of Mattoon, IL, passed away July 14, 2017 at 5:00A.M. at Mattoon Health Center in Mattoon, IL, 61938, surrounded by his loved ones after a courageous battle with mesothelioma. The funeral service in his honor... View Obituary & Service Information

The family of Robert Norman Plush Sr. created this Life Tributes page to make it easy to share your memories.

Send flowers to the Plush family.