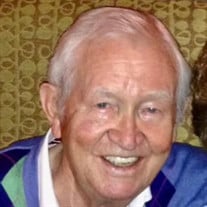 Robert R. “Coach” Miller, 92, of Mattoon, IL passed away on January 26, 2021 at Odd Fellow-Rebekah Home in Mattoon, Illinois. Arrangements for a Celebration of Bob’s life will be announced at a later date. Mitchell-Jerdan Funeral Home, 1200 Wabash Avenue, Mattoon, IL 61938 is in charge of arrangements. Bob was born on October 12, 1928 in Wayne City, Illinois, son of the late Ross and Carrie (Legg) Miller. He is survived by his spouse Betty Miller of Mattoon, IL; three children: one daughter, Kimberly (Patrick) Keeley of Campton Hills, IL; two sons, Brad (Sydney) Miller of Huntington Beach, CA, and Brook Miller of Falls Church, VA; two grandchildren: Amanda Miller of Huntington Beach, CA, Michael (Ashley) Keeley of Hinsdale, IL; one great-grandchild, Leighton Keeley; and one sister, Jennie Tooley Kelley. He is preceded in death by his brother, James Clayton Miller, and three sisters, Alma Irwin, Alberta Miller, and Roberta Miller. Bob attended Wayne City schools where basketball became a big part of his life. His dad made him a basketball hoop which was much smaller than regulation. After shooting on it, the regulation one looked huge contributing to his success as a shooter on good teams in high school. His average of nearly twenty-two points per game his senior year was rare for that time period. Following high school graduation in 1946, Bob enlisted in the U.S. Army and served overseas in Tokyo, Japan through most of 1947. His service prior to the end of 1946 earned him the distinction of WWII Veteran. After the army, he attended McKendree College where he earned his BA degree. At McKendree, he was a key player on the basketball team. He earned a MS degree at Millikin University and furthered his studies at Eastern IL. University. On January 15, 1950, Bob married Beverly Wilkerson and they had three children. Bob was a devoted father. He shared much mutual love and admiration with his children, grandchildren and extended family members. Bob spent thirty-five years in Illinois public education. He was a teacher and coach in O’Fallon, Tower Hill, Blue Mound, and Mattoon. After his time at Mattoon high school, he was Off-Campus Housing Director at Eastern IL University for nearly two years. In 1970, Bob was elected to the office of Coles County Superintendent of Schools. He became regional superintendent after Coles County consolidated with five other counties. In all, Bob served nearly four terms. Also, he owned and operated an independent insurance agency while in Blue Mound. In 1981, he was inducted into the IHSA Basketball Coaches Hall of Fame. On September 29, 1990 Bob married Betty Ronchetti and acquired seven adult stepchildren. Adding to his three children it was a large but fun family. Bob and Betty were both in their 60’s and retired. They spent six months in Florida and six months in Mattoon. They traveled extensively in Europe, South America and Asia. Bob commented that he would have taught history better had he been able to travel before teaching. Bob and Betty had a wonderful life together traveling, dancing every Friday night in Florida, golfing, going to football games at EIU and U of I. In 2017, they moved permanently back to Illinois. Bob was a member of the First Presbyterian Church in Mattoon, Mattoon Rotary, Mattoon Golf and Country Club, Winter Haven Country Club and the Winter Haven American Legion. Bob never knew a stranger. He spoke to everyone and always had a smile on his face. He was very charitable to many organizations. This would not be complete without mentioning what a great Chicago Cubs fan he was throughout his life. Please visit www.mitchell-jerdan.com or www.facebook.com/mitchelljerdanfuneralhome to light a virtual candle in his honor or share a memory with the family.

Robert R. &#8220;Coach&#8221; Miller, 92, of Mattoon, IL passed away on January 26, 2021 at Odd Fellow-Rebekah Home in Mattoon, Illinois. Arrangements for a Celebration of Bob&#8217;s life will be announced at a later date. Mitchell-Jerdan... View Obituary & Service Information

The family of Robert R. Miller created this Life Tributes page to make it easy to share your memories.