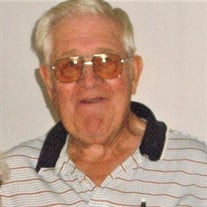 Robert Mack Lawrence, age 94 of Mattoon, IL passed away Thursday, June 17, 2021, at Sarah Bush Lincoln Health Center in Mattoon, IL. A funeral service in his honor will be held at 2:00 PM Wednesday, June 23, 2021, at Mitchell-Jerdan Funeral Home, located at 1200 Wabash Avenue, Mattoon, IL 61938; Reverend Ron Dickinson will officiate. A committal service will immediately follow in Dodge Grove Cemetery with Military Rites conducted by Mattoon VFW Post 4325. The visitation will be held from noon until the time of service at the Mitchell-Jerdan Funeral Home. Bob was born on August 15, 1926, in Neoga, IL to the late Henry and Lurline (McCartney) Lawrence. He married Janelle Woodruff on June 30, 1946, in Mattoon, IL; she preceded him in death on January 2, 2008. Bob is survived by his children, David Lawrence and wife Jay Ellen of Sherwood, AR, Lynda Lawrence of Mattoon, IL; three grandchildren, Jessye Lawrence of Mattoon, IL, Tricia Yielding and husband Travis of Sherwood, AR, Amanda Crowley of Sherwood, AR; five great-grandchildren, Landon Lawrence, Gracie, Tessa and Tanner Yielding, and Ella Crowley. He is preceded in death by one brother, Ulysses Eugene “Gene” Lawrence and one sister Lola Crawford. Bob honorably served our country in the U.S. Navy during WWII, stationed on an USS LST 950 from 1944 until 1946. He was employed by Blaw-Knox as a model shop technician in Mattoon, IL and he retired in 1991. Bob was a member of the First United Methodist Church, VFW Post 4325, Eagle Club, American Legion, and Masonic Lodge #260 as a 32nd Degree Mason. He enjoyed spending the day on the golf course and dancing the night away. Bob built model airplanes, some that are displayed at Coles County Memorial Airport. He liked traveling but particularly to Fort Myers Beach, FL where he spent his winters with family and friends. Bob was adored by many and will be missed by all. Memorials in his honor may be made to First United Methodist Church, 1601 Charleston Avenue, Mattoon, IL 61938. Please visit www.mitchell-jerdan.com or www.facebook.com/mitchelljerdanfuneralhome to light a virtual candle in his honor or share a memory with the family.

The family of Robert M. Lawrence created this Life Tributes page to make it easy to share your memories.

Send flowers to the Lawrence family.