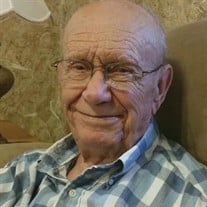 Mattoon, IL – Robert Eugene Kelly, age 84, of Mattoon, IL, passed away at 3:30 p.m., August 22, 2016, at Sarah Bush Lincoln Health Center. The funeral service in his honor will begin at 1:00 p.m., Thursday, August 25, 2016, at Mitchell-Jerdan Funeral Home, 1200 Wabash Avenue, Mattoon, IL 61938. Reverend Kevin Wolf will officiate. Interment will be in Dodge Grove Cemetery, Mattoon, IL. Visitation will be held at the funeral home from 11:00 a.m. until the service begins. Robert was born March 13, 1932, in Mattoon, IL, the son of Harold and Nora (McFarland) Kelly. He married Betty Welch on October 2, 1952, in Mattoon, IL. They enjoyed nearly sixty-two years together before she passed away on September 4, 2014. Survivors include their two children, Monica Graham with Richard Knollenberg of Mattoon, IL; and Todd Kelly and wife Angie of Mattoon, IL; four grandchildren, Jamie Grena and husband Mark of Wheaton, IL, Amanda O’Neil and husband John of Mattoon, IL, Reed Kelly of Mattoon, IL, and Braden Kelly of Mattoon, IL; and two great-grandchildren, Riley Lawson of Sullivan, IL, and Matthew Grena of Wheaton, IL. In addition to his loving wife, Robert was preceded in death by his parents; a brother, Kenneth W. Kelly; and three sisters, Sharon Kelly, JoAnn Cooley, and Wanda Kelly. Mr. Kelly served our country with the United States Army during the Korean War. He was a member of the Broadway Christian Church and a retired Signal Maintainer with the Illinois Central Gulf Railroad. Other memberships include the Eagles Lodge, Moose Lodge, and American Legion, all of Mattoon, IL. Vacationing with Betty was the highlight of Robert’s life. He also cherished time with his children, grandchildren, and great-grandchildren. Memorials in his honor may be made to the Broadway Christian Church, 1205 S. 9th St., Mattoon, IL, 61938. Please visit www.mitchell-jerdan.com or www.facebook.com/mitchelljerdanfuneralhome to view the video tribute, light a virtual candle in his honor, or share a memory with his family.

The family of Robert Eugene Kelly created this Life Tributes page to make it easy to share your memories.

Send flowers to the Kelly family.