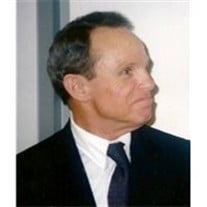 Mattoon, IL-Robert C. Hardwick, age 74, of Mattoon, IL, passed away at 9:00 p.m., Monday, September 2, 2013, at Mattoon Health Care Center.\r\n\r\nThe funeral service in his honor will begin at 12:00 p.m., Friday, September 6, 2013, at the First Baptist Church, 1804 South Ninth Street, Mattoon, IL, with Reverend Dennis Strawn and Reverend Robert Clark officiating. Visitation will be held at the church from 10:00 a.m. until the service begins. Mitchell-Jerdan Funeral Home, located at 1200 Wabash Avenue, Mattoon, IL, is assisting the family with arrangements. \r\n\r\nBorn January 16, 1939, Robert was the son of Robert E. and Betty L. (Shores) Hardwick. Survivors include one sister, Janice Morgan and husband Robert of Toledo, IL; two nephews, Steve Morgan and wife Teri of Neoga, IL, and Jason Morgan and wife Kelly of Mattoon, IL; three nieces, Julie Gerkin and husband Mike of Mattoon, IL, Shelly Scott and husband Mark of Mattoon, IL, and Amy Maninfior and husband Jeff of Mattoon, IL; and great nieces and nephews: Matthew, Molly, Michael, and Michelle Morgan; Jordan, Jacob, Sophie, and Sam Gerkin; Noah Scott; Blake, Nick, and Lily Maninfior; and Nathan and Olivia Morgan. He also leaves his loyal friend and former secretary, Carol Perrie of Leonard Town, Maryland. He was preceded in death by his parents and one niece, Danielle Scott. \r\n\r\nMr. Hardwick was a member of the First Baptist Church of Mattoon and was instrumental in the development of the television ministry program there. Having earned his Master's Degree, he served as the Executive Assistant to the President and Director of Planning for the Prince George Community College. \r\nRobert enjoyed traveling to Europe and was fond of the opera. \r\n\r\nMemorials in his honor may be made to the Michael J. Fox Foundation for Parkinson's Research-Grand Central Station, P.O. Box 4777, New York, NY 10163-4777.\r\n\r\nPlease visit www.mitchell-jerdan.com or www.facebook.com/mitchelljerdanfuneralhome to light a virtual candle in his honor or share a memory with his family.\r\n

The family of Robert C. Hardwick created this Life Tributes page to make it easy to share your memories.

Send flowers to the Hardwick family.