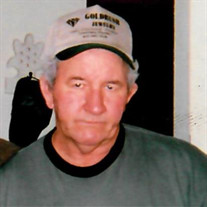 Robert “Wilkie” E. Elder, age 74, of Cooks Mills, IL passed away on Friday, March 29, 2019 at 7:38 A.M. while a patient at Sarah Bush Lincoln Health Center in Mattoon, IL. Funeral services will be held at 12:00 P.M. on Wednesday, April 3, 2019 at the Mitchell-Jerdan Funeral Home, 1200 Wabash Ave., Mattoon, IL 61938 with Reverend Gene Wright officiating. Burial will follow with military rights by Mattoon, IL VFW Post # 4323 at the Pleasant Grove Cemetery in Cooks Mills, IL. A visitation will be held from 10:00 A.M. until time of service on Wednesday, April 3, 2019 at the Mitchell-Jerdan Funeral Home in Mattoon, IL. Robert “Wilkie” was born on February 11, 1945 In North Okaw Township, IL the son of the late Robert and Evelyn (Morgan) Elder. Survivors include five children; Shalana Marie Elder and Joe Dobbs of Mattoon, IL, William Robert Elder of Humboldt, IL, Tiffany Diane Elder of Humboldt, IL, Deatra Ann Carter and her husband Larry of Altamont, IL, Breanna Lynn Amoussou of Mattoon, IL; one brother, Mike Elder and his wife Debbie of Arcola, IL,; three sisters, Lila Weisel of Baxley, GA, Brenda O’Dell and her husband Wayne of Cooks Mills, IL and Kathy Cougill and her husband Larry of Cooks Mills, IL; five grandchildren, Khloe Mae Dobbs, Evelyn Leeann Dobbs, Darime Amoussou, Emily Williams and Kora Joseph. Robert proudly served our country in the Army stationed in South Korea. He was a retired Construction Foreman for the Labor Union #159 of Decatur, IL. Robert was an outdoorsman but particularly liked driving through the country scouting for deer and fishing. He also enjoyed spectator sports such as golf, basketball and football especially at the college level. Other hobbies included woodworking, making a rocking horse for his granddaughter, mushroom hunting and working on cars. Above all he relished time spent with his family and friends and will be truly missed by all those whose lives he touched. Memorials may be made to the family in care of Mitchell-Jerdan Funeral Home. Please visit www.mitchell-jerdan.com or www.facebook.com/mitchelljerdanfuneralhome to light a virtual candle in his honor or share a memory with the family.

The family of Robert "Wilkie" E. Elder created this Life Tributes page to make it easy to share your memories.

Send flowers to the Elder family.