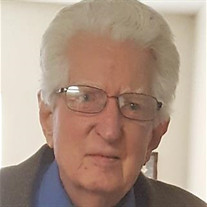 On Thursday, December 28, 2017, Robert Louis Beall, known to friends and family as Bob, father, grandfather, brother, and uncle, peacefully and prayerfully passed away. The funeral mass in his honor will be held at 10:00 A.M., Saturday, January 6, 2018, at the Immaculate Conception Catholic Church, 320 N. 21st Street, Mattoon, IL 61938. A graveside burial will be held immediately thereafter at Calvary Cemetery. Military rites will be conducted by the Mattoon VFW Post 4325. A rosary service will be conducted at 3:30 P.M., Friday, January 5, 2018, with a visitation following from 4:00 P.M. - 8:00 P.M. at Mitchell-Jerdan Funeral Home, located at 1200 Wabash Avenue, Mattoon, IL 61938. Bob will forever be remembered as a loving father to Elizabeth Swanson (Dave), Rebecca D’Angelo (Steve), Rob Beall (LeeAnn), and Jeff Beall and grandfather to Patrick, Karryn, Erin, Leena, Ryan, Brandon, Nicholas. He is survived by his sister, Mary Catherine Beall and preceded in death by his brothers Joseph Beall and John Beall, and his sister Martha Franz. Bob will also be remembered by his numerous nieces, nephews, extended family and friends. Bob was born January 22, 1930 in Mattoon, IL, the son of Paul and Margaret (Clavan) Beall. He was employed by Montgomery Wards as a manager. He honorably served our country in the Air Force during the Korean War. Bob dedicated himself to the Catholic faith and “represented the Gospel without the noise and clatter of words.” He was a longtime member of the Immaculate Conception Catholic Church, Society of St. Vincent de Paul, Knights of Columbus, and Eucharistic Minister. Being the selfless man that he was, Bob admirably developed Mattoon Area Public Action to Deliver Shelter (P.A.D.S.) as the founding President, active volunteer and board member. He was a devout father and amazing grandfather. The family will cherish their memories of his humor, faith, family focus and positive energy in his work for those less fortunate. Memorials in his honor may be made to Mattoon Area P.A.D.S., 2017 Broadway Avenue East, Mattoon, IL 61938. Please visit www.mitchell-jerdan.com or www.facebook.com/mitchelljerdanfuneralhome to light a virtual candle in his honor or share a memory with his family.

On Thursday, December 28, 2017, Robert Louis Beall, known to friends and family as Bob, father, grandfather, brother, and uncle, peacefully and prayerfully passed away. The funeral mass in his honor will be held at 10:00 A.M., Saturday, January... View Obituary & Service Information

The family of Robert Beall created this Life Tributes page to make it easy to share your memories.

Send flowers to the Beall family.