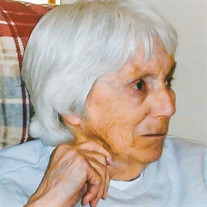 Mattoon, IL – Rita L. James, age 85, of Mattoon, IL, passed away at 5:45 p.m., Sunday, October 9, 2016, at her residence. The funeral mass in her honor will begin at 10:00 a.m., Thursday, October 13, 2016, at the Immaculate Conception Catholic Church, 320 N 21st St, Mattoon, IL 61938, with Father John Titus officiating. Burial will follow in Calvary Cemetery. Visitation will be held at the church from 9:00 a.m. until the service begins. Mitchell-Jerdan Funeral Home, located at 1200 Wabash Avenue, Mattoon, IL 61938, is assisting the family with arrangements. Born September 8, 1931, in Carroll, IA, Rita was the daughter of Henry and Loretta (Zenner) Roetker. She married William E. James on September 28, 1951, in Mattoon, IL. He passed away in June, 2006. Survivors include their children, Dennis James and wife Shelley of Mattoon, IL, Robert James of Mattoon, IL, David James and wife Tammy of Mattoon, IL, Patty Hartbank and husband Fred of Mattoon, IL, Kathy Nichols and husband Michael of Mattoon, IL, Vernon James and wife Sandy of Mattoon, IL, Mary Nash and husband Barry of Downs, IL, and Michael James of Mattoon, IL; one sister, Betty Mulvihill of Springfield, IL; fifteen grandchildren; fourteen great-grandchildren; and her cherished dog, Kooper. In addition to her husband, she was preceded in death by her parents, five brothers, and one sister. Mrs. James was a member of the Immaculate Conception Catholic Church. She was a homemaker and volunteer at St. Mary’s School. Her hobbies included reading, crossword puzzles and gardening. She was a wonderful wife, a loving mother, and an adoring grandmother and great-grandmother. Memorials in her honor may be made to the St. Mary’s School, 2000 Richmond Avenue, Mattoon, IL 61938. Please visit www.mitchell-jerdan.com or www.facebook.com/mitchelljerdanfuneralhome to light a virtual candle in her honor or share a memory with her family.

The family of Rita L. James created this Life Tributes page to make it easy to share your memories.

Send flowers to the James family.