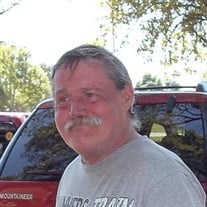 Mattoon, IL – Richard “Rick” Wells, age 61, of Mattoon, IL, passed away at 12:32 p.m., July 6, 2017 at Carle Foundation Hospital. Services in his honor will be held at a later date. Mitchell-Jerdan Funeral Home, located at 1200 Wabash Avenue, Mattoon, IL 61938, is assisting the family with arrangements. Born March 24, 1956, in Paris, IL, Rick was the son of Eugene and Shirley R. (Shelton) Wells. He is survived by his loving wife, Sandy (Waters) Wells; his mother, Shirley Wells; Two Brothers, Gary Wells of Virginia Beach VA, and Mike (Carol) Wells of Effingham, IL; four sisters, Karen (Ted) Littlejohn of Paris, IL, Diane Rickleman of Mattoon, IL, Lisa (Darrell) Ligget of Marshall, IL, and Carolyn (Don) Littlejohn of Lawrenceville, IL; and one step- grandchildren, Jacob Start of Decatur, IL. He was preceded in death by his father and one brother, Bobby Wells. In his free time, he enjoyed fishing; however, he enjoyed nothing more than spending time with his family. Please visit www.mitchell-jerdan.com or www.facebook.com/mitchelljerdanfuneralhome to light a virtual candle in his honor or share a memory with his family.

The family of Richard Allen Wells created this Life Tributes page to make it easy to share your memories.

Send flowers to the Wells family.