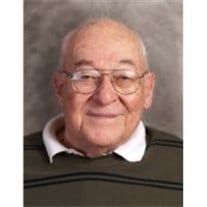 Mission, Kansas-Richard G. Jones, age 93, of Mission, Kansas, formerly of Mattoon, Illinois, passed away at his home on February 22, 2012.\r\n\r\nA funeral service in his honor will be held Saturday, March 24, 2012, at 10:00 a.m. at the First Presbyterian Church, 10 Charleston Avenue in Mattoon. Reverend Art Woolverton will officiate. Interment will be in Rest Haven Memorial Gardens immediately following the service. Visitation will be held Friday evening from 5:00-7:00 p.m. at Mitchell-Jerdan Funeral Home, 1200 Wabash Avenue in Mattoon.\r\n\r\nBorn June 11, 1918, in Chicago, Illinois, Richard was the son of the late George G. and Mary S. (Wellner) Jones. He married Ann Barnekow on April 18, 1942, in Metuchen, New Jersey. She passed away November 19, 2002. Survivors include two daughters, Tracy McVay and husband Myron of Prairie Village, Kansas; and Deborah Barnekow and husband Leroy Finke of El Jebel, Colorado; one grandson, Chris McVay of Kansas City, Missouri; and a cousin, Leonard Schneller and wife Aileen of Park Ridge, Illinois. \r\n\r\nMr. Jones was a member of the First Presbyterian Church of Mattoon. A veteran of World War II, he served in the Army-Airforce teaching pilots how to fly by instrument. He graduated from DePauw University in Greencastle, Indiana, where he was a member of the social fraternity Phi Gamma Delta. In 1946, after his army discharge and a brief stay in New York, Richard and Ann moved to Mattoon to join the Checkley Insurance Agency where he later became a partner. He was also a member of the Lions Club and past president of the Illinois Independent Insurance Agents Association. Both RIchard and Ann were very active with international students of the American Field Service: after retirement they traveled abroad and visited many of the students with whom they had become friends. \r\n\r\nRichard's favorite pastimes included playing golf and bridge, and reading. He attended his first baseball game with his father at the age of 8 and became a life-long, devoted fan of the Chicago Cubs. He will be truly missed by his family and friends.\r\n\r\nMemorials in his honor may be made to the Children's Fund at the First Presbyterian Church. \r\n\r\nPlease visit www.mitchell-jerdan.com to light a virtual candle in his honor or share a memory with his family.\r\n

The family of Richard G. Jones created this Life Tributes page to make it easy to share your memories.

Send flowers to the Jones family.