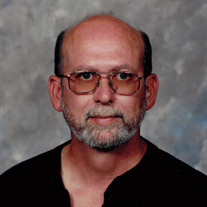 Richard “Dick” Lee Dobbs, age 64 of Mattoon, IL passed away at 1:53 PM, Saturday, February 15, 2020 at Palm Terrace in Mattoon, IL. A funeral service in Richard’s honor will be held at 1:00 PM, Friday, February 21, 2020 at Mitchell-Jerdan Funeral Home, 1200 Wabash Avenue, Mattoon, IL 61938; Pastor Brad Brown will officiate. A committal service will be held immediately after in Beals Cemetery in Trilla, IL. The visitation will be held the same day from 11:00 AM until the time of service at the funeral home. Richard was born on October 14, 1955 in Mattoon, IL the son of Robert L. and Stella M. (Clough) Dobbs. He is survived by his father, Robert L. Dobbs of Mattoon, IL, and one brother, Steven E. Dobbs of Mattoon, IL. He is preceded in death by his mother and one sister, Beverly S. Dobbs. Richard was employed by RR Donnelly in Mattoon, IL as production operator for thirty-four years before his retirement in 2005. He was an avid Harley-Davidson Motorcycle rider, member of the RR Donnelly “Last Edition Motorcycle Club”, Sullivan and Charleston Gun Club, and several skeet and trap teams. Richard touched the lives of many and his memory will live on. He will be fondly remembered. Memorials in Richard’s honor may be to Alzheimer’s Association Illinois Chapter, 8430 West Bryn Mawr Avenue #800, Chicago, IL 60631. Please visit www.mitchelljerdan.com or www.facebook.com/mitchelljerdanfuneralhome to light a virtual candle in his honor or share a memory with the family

The family of Richard Lee Dobbs created this Life Tributes page to make it easy to share your memories.

Send flowers to the Dobbs family.