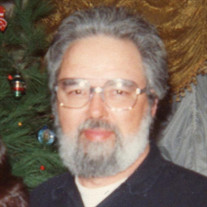 Richard M. Daniell, age 78 of Mattoon, IL passed away at 3:50 AM on Friday, November 12, 2021, at his residence in Mattoon, IL. A funeral service in his honor will be held at 12:00 PM, Wednesday, November 17, 2021, at Mitchell-Jerdan Funeral Home, located at 1200 Wabash Avenue, Mattoon, IL 61938. Reverend Ron Dickinson will officiate. A committal service will immediately follow at Resthaven Memorial Gardens in Mattoon, IL. The visitation will be held from 10:00 AM until the time of service at the funeral home. Richard was born January 18, 1943, in Lawton, OK the son of Richard Iris and Ollie Jean (Grafton) Daniell. He married Vicki Lynn Evans on December 24, 1964, in Mattoon, IL. She survives and resides in Mattoon, IL. He is also survived by one daughter, Katina M. Monzon and husband Ricardo “Rick” of Wheeling IL; one son, Dayne W. Daniell and wife Lori of Charlotte, NC; one granddaughter, Kaitlyn C. Monzon of Wheeling, IL; one brother, Michael W. Daniell and wife Carol of Charleston, IL; one half-sister, Janet Shanks of Paris, IL. He was preceded in death by two half-brothers. A proud veteran of the United States Navy, Richard was stationed in San Diego, CA and Key West, FL where he served as sonar operator on a helicopter squadron. After his honorary release, he gained employment at Caterpillar in Decatur, IL as an inspector for more thirty years before his retirement. As a Prairieland Frontiersmen of Central Illinois near Sullivan, IL Richard had the privilege of engaging in weekend rendezvous and black powder shooting. However, his most cherished moments were spent with his family and friends. Constructing doll houses with his wife was an activity they both enjoyed. Richard was a kind and caring man who adored his family. He will be greatly missed by all who knew and loved him. Memorials in his honor may be made to St. Jude Children’s Hospital, 501 St. Jude Place, Memphis, TN 38105. Please visit www.mitchell-jerdan.com or www.facebook.com/mitchelljerdanfuneralhome to light a virtual candle in his honor of share a memory with the family.

The family of Richard M. Daniell created this Life Tributes page to make it easy to share your memories.

Send flowers to the Daniell family.