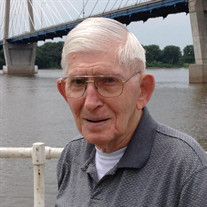 Mattoon, IL – Richard “Dick” Bennett, age 86, of Mattoon, IL, passed away at 7:20 a.m., Thursday, March 2, 2017, at the Illinois Veterans Home in Quincy, IL. The funeral service in his honor will begin at 2:00 p.m., Tuesday, March 7, 2017, at Mitchell-Jerdan Funeral Home, 1200 Wabash Avenue, Mattoon, IL 61938. Pastor Brad Brown will officiate. Interment will follow in Dodge Grove Cemetery. Visitation will be held at the funeral home from 1:00 p.m., until the service begins. Born April 5, 1930, Dick was the son of Glen O. and Vivien M. (Royer) Bennett. He married Joan Sweeney on July 14, 1956, in Corinth, MS. She passed away on February 16, 2008. Survivors include their son, Jim Bennett and wife Lynn of Mattoon, IL; two grandchildren, Michael Bennett of Mattoon, IL, and Alisha Bennett of Decatur, IL; two brothers, Jerry Bennett and wife Jackie of Charleston, IL, and Robert Bennett and wife Marilyn of St. Louis, MO; one sister-in-law, Betty Craig of Mattoon, IL; and several nieces and nephews. In addition to his wife, he was preceded in death by his parents; his step-mother, Nina Bennett; and a brother, Donald Craig. Mr. Bennett served our country with the United States Army. He earned his living as a heavy equipment operator with the International Union of Operating Engineers Local 844. He formerly held memberships with the Mattoon Moose Lodge 803 and Mattoon Eagles Lodge 3438. Mr. Bennett enjoyed the simple things in life. He treasured time spent in the garden with his wife, enjoyed travelling, fishing, playing pool, and appreciated a good game of cards with friends. Dick was known for his mechanical inclination, a gift he passed on to his son. Together, they spent many hours working on cars and fixing things. He valued family more than anything, and especially enjoyed spending time with his grandchildren. Please visit www.mitchell-jerdan.com or www.facebook.com/mitchelljerdanfuneralhome to light a virtual candle in his honor or share a memory with his family.

The family of Richard "Dick" Bennett created this Life Tributes page to make it easy to share your memories.