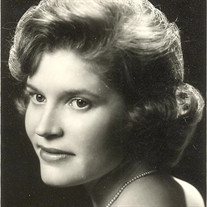 Mattoon, IL – Rebecca A. Barrow, age 74, of Mattoon, IL, passed away at 11:30 p.m., Sunday, October 30, 2016, at the Odd Fellow-Rebekah Home in Mattoon, IL. The graveside service in her honor will begin at 1:30 p.m., Saturday, November 5, 2016, at Branchside Cemetery, Gays, IL. Reverend Robert Clark will officiate. Visitation will be held from 12:00 p.m. – 1:00 p.m. at Mitchell-Jerdan Funeral Home, 1200 Wabash Avenue, Mattoon, IL, 61938. Born February 12, 1942, in Mattoon, IL, Rebecca was the daughter of Cecil R. and Virginia (Fleenor) Barrow. She was preceded in death by her parents. Survivors include two cousins, Alice Deininger of Decatur, IL, and Rita Getz and husband James of McHenry, IL; and close family friends, Bruce and Jo Daily of Mattoon, IL. Rebecca was a member of the National Honor Society and Valedictorian of her high school class. She graduated from Millikin University in 1963 Summa cum laude and received a Bachelor of Music degree. She was also presented the Erna Pritchett Memorial award for being the highest ranking woman in her class. She received her Master of Science degree from Juilliard School of Music in New York City on May 28, 1965. She won the Fulbright-Hays award to study in Italy for one year and attended the Italian Summer Session at the Accedemia Musical Chigians in Siena, Italy for three summers. Rebecca gave numerous concerts throughout her career. She served on the faculty at the North Carolina School of Arts in Winston-Salem, North Carolina for nearly 30 years before retiring back in Mattoon, IL. Rebecca loved her music and birds. Memorials in her honor may be made to Branchside Cemetery, Gays, IL. Please visit www.mitchell-jerdan.com or www.facebook.com/mitchelljerdanfuneralhome to light a virtual candle in her honor or share a memory with her family.

The family of Rebecca A. Barrow created this Life Tributes page to make it easy to share your memories.

Send flowers to the Barrow family.