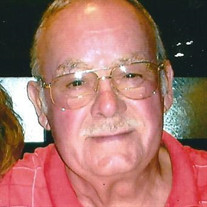 Mattoon, IL – Rayburn “Ray” Lee Rich, age 83, of Mattoon, IL, passed away at 10:30 a.m., Wednesday, February 17, 2016, at Douglas Rehabilitation and Care Center. The funeral service in his honor will begin at 11:00 a.m., Saturday, February 20, 2016, at Mitchell-Jerdan Funeral Home, 1200 Wabash Avenue, Mattoon, IL 61938. Pastor Brad Brown will officiate. Interment will follow in Dodge Grove Cemetery with military rites conducted by the Mattoon VFW Post 4325. Visitation will be held at the funeral home from 10:00 a.m. until the service begins. Born October 1, 1932, on a farm in rural Douglas County, near Arcola, IL, Ray was the son of Theodore and Orlena (Blevins) Rich. He married Janet Branson on September 2, 1956 in Mattoon, IL. Survivors include his loving wife of nearly 60 years, Janet Rich; two daughters, Kim Welton and husband Mark, and Sandy Lucier and husband Mike; and one brother, Jim Rich and wife Paula, all of Mattoon, IL; and one sister, Marge Hurst. He leaves three grandchildren: Macey Welton, Tyler Lucier and wife Heidi, and Alexa Lucier; and two great grandchildren: Isabelle and Bryson Lucier, all of Mattoon, IL. He was preceded in death by his parents, three brothers, and one sister. Mr. Rich served our country with the United States Navy from 1952 until 1958. Then, prior to retiring in 1991, was employed with Caterpillar, Inc. of Decatur, IL. When he wasn’t working, Ray had excellent carpentry and woodworking skills that he liked to put to good use, and although he was not a farmer, Ray also thoroughly enjoyed helping his family on their farm. Attending auctions and taking tandem bike rides with his beautiful bride were some of his favorite pastimes. Memorials in his honor may be made to the American Diabetes Association, www.diabetes.org, 2501 Chatham Road, Suite 210, Springfield, IL, 62704. Please visit www.mitchell-jerdan.com or www.facebook.com/mitchelljerdanfuneralhome to light a virtual candle in his honor or share a memory with his family.

The family of Rayburn "Ray" Lee Rich created this Life Tributes page to make it easy to share your memories.

Send flowers to the Rich family.