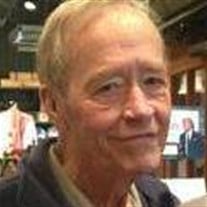 Mattoon, IL – Peter L. McGow, age 77, of Mattoon, IL, passed away at 5:40 p.m., Monday, June 27, 2016, at his residence. The funeral Mass in his honor will begin at 10:00 a.m., Thursday, June 30, 2016, at the Immaculate Conception Catholic Church. There will be no visitation. Burial will take place in Calvary Cemetery. Mitchell-Jerdan Funeral Home, located at 1200 Wabash Avenue, Mattoon, IL 61938, is assisting the family with arrangements. Born in Clinton, IN, on June 18, 1939, Peter was the son of Charles Glen and Alice (Lowe) McGow. He married Marcia Wilkinson on December 12, 1965 in Mattoon, IL. He later married Nancy L. Kull on March 3, 2001. He is survived by his wife, Nancy L. McGow, of Mattoon, IL; Five children, Bryan D. McGow and wife Betsy of Champaign, IL, Heather A. Hall and husband Darrin of Savoy, IL, Meghan N. McGow of Champaign, IL, Michael J. Kull and wife Jennifer of Mattoon, IL, and Jared N. Jozwik of Mattoon, IL; One brother, and Two sisters. He leaves nine grandchildren: Jennifer McGow, Justin McGow, Jessica Lundberg, Emma Echols, Austin Echols, Christopher Echols, Marissa Echols, Benjamin Kull, and Bailey Kull. He is also survived by his first wife and mother of his children, Marcia Wilkinson. He was preceded in death by his parents, three brothers, and one sister. Mr. McGow was employed by the United States Postal Service and served as Postmaster of the Mattoon and Champaign post offices for a combined total of more than thirty-five years. He attended the Holy Cross Catholic Church in Champaign, IL where he served as Deacon, and the Immaculate Conception Catholic Church of Mattoon, IL. He was a member of the Lions Club in Danville, IL, Champaign, IL, and Mattoon, IL; Knights of Columbus of Champaign, IL; and the Moose Lodge of Mattoon, IL. He was a loyal fan of Illini Basketball and the St. Louis Cardinals. In his free time, he was an avid bowler and golfer, and enjoyed working in his yard. His children and grandchildren were the light of his life and he made every effort to be present in the eventful moments of their lives. Please visit www.mitchell-jerdan.com or www.facebook.com/mitchelljerdanfuneralhome to light a virtual candle in his honor or share a memory with his family.

The family of Peter L. McGow created this Life Tributes page to make it easy to share your memories.

Send flowers to the McGow family.