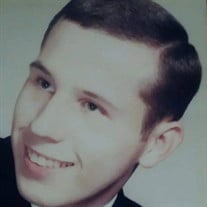 Peter Alan Copsy, age 72 of Mattoon, IL passed away at 11:45 PM, Monday, November 25, 2019 at his residence surrounded by his family. A celebration of life in his honor will be held from 1:00-5:00 PM, Saturday, November 30, 2019 at Mattoon VFW, 1220 S 19th Street, Mattoon, IL 61938. Mitchell-Jerdan Funeral Home located at 1200 Wabash Avenue, Mattoon, IL 61938 is assisting the family with services. Peter was born on April 9, 1947 in Hammond, IN the son of the late Rexford W. and Kathleen G. (Armstrong) Copsy. He married Betty “Brenda” J. Belt on April 13, 1968 in Covington, IN; she survives. Other survivors include three sons, James David Copsy and wife Therese of Mattoon, IL, Jon Allen Copsy and wife Darlanell of Mattoon, IL, and Phillip Michael Copsy and wife Elizabeth of Charleston, IL; eight grandchildren; two great-grandchildren; and one sister, Nancy E. Copsy of Mattoon, IL. He is preceded in death by four sisters and three brothers. Peter honorably served our country during the Vietnam Conflict in the Navy. He was employed by Trailmobile in Charleston, IL and previously Hyster-Yale in Danville, IL. He was a member of the American Legion Post 88 in Mattoon, IL. He enjoyed working on old cars, woodworking, and playing card games. Peter was a devoted family man who cherished the times spent with his children and grandchildren, especially during the holiday season. His memory will live on through the hearts of his loved ones. Please visit www.mitchelljerdan.com or www.facebook.com/mitchelljerdanfuneralhome to light a virtual candle in his honor or share a memory with the family.

The family of Peter Alan Copsy created this Life Tributes page to make it easy to share your memories.

Send flowers to the Copsy family.