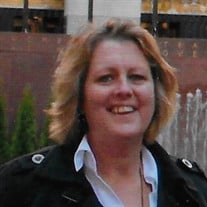 Special educator, Paula Sue Dowling, age 61 of Champaign, IL formerly of Charleston, IL passed away on Tuesday, December 7, 2021, at Carle Foundation Hospital in Urbana-Champaign, IL. A funeral service in her honor will be held at 12:00 PM, Friday, December 17, 2021, at Mitchell-Jerdan Funeral Home, 1200 Wabash Avenue, Mattoon, IL 61938. Reverend Jeremy Doughty will officiate with the assistance of Father Larry Dowling. The visitation will be held the same day from 10:00 AM until the time of service at the funeral home. A private family burial will follow at a later date in Oakland Cemetery in Oakland, IL. Paula was born on March 29, 1960, in Hammond, IN to the late Paul P. and Rosemary R. (Hall) Asbell. She married Donald J. Dowling on October 11, 2010, in Charleston, IL; he survives and resides in Champaign, IL. Paula is also survived by her three children, Steffanie Davis and wife Kate of Lemont, IL, Jesse Davis and fiancée Jenna Pohl of Dyersburg, TN, and Ashley Davis of Champaign, IL as well as step daughter Hannah Dowling of Charleston, IL, two grandsons, Kaden and Logan Davis of Lemont, IL; three brothers, Brian Asbell and wife Linda of Rockford, IL, Thomas Walker and wife Heather of Normal, IL, Scott Asbell and wife Kelly of Valparaiso, IN; one sister, Tiffany Meyers of Hammond, IN; Stepmother, Tommie Asbell of Highland, IN; and numerous nieces and nephews. She is preceded in death by her brother, Todd Asbell. Paula received a Bachelor of Science in Education in Special Education in 2006 and a Master’s in Educational Leadership from Eastern Illinois University in Charleston, IL in 2010. With great passion, Paula thrived in her teaching career and in enhancing the lives of learners with disabilities. Paula was honored in 2018 for her work with the Leadership and Service Award from Eastern’s College of Education and Professional Studies. She was currently employed at Doctor Howard Elementary School in Champaign, IL. Prior to her work at Doctor Howard, Paula was instrumental in the development of Circle Academy in Rossville, IL. She served as the school principal there for seven years and, early in her career, implemented special education programs at Mattoon High School. Some of the things that gave her joy were ocean beaches, sunrises, and a strong cup of coffee. Paula was an avid fan of the Chicago Cubs and Bears and enjoyed playing golf with her spouse, Don. There was nothing more valuable to Paula than the times shared with her family and especially her grandchildren, Kaden and Logan, that meant more to her than life itself. Paula’s legacy of love, kind-heartedness, and generosity will be carried on through the hearts of her loved ones and the people whose lives she touched. She will be fondly remembered by all. Memorials in her honor may be made to Developmental Services Center, 1304 W. Bradley Avenue, Champaign, IL 61821. Please visit www.mitchell-jerdan.com or www.facebook.com/mitchelljerdanfuneralhome to light a virtual candle in her honor or share a memory with the family.

Special educator, Paula Sue Dowling, age 61 of Champaign, IL formerly of Charleston, IL passed away on Tuesday, December 7, 2021, at Carle Foundation Hospital in Urbana-Champaign, IL. A funeral service in her honor will be held at 12:00 PM,... View Obituary & Service Information

The family of Paula Sue Dowling created this Life Tributes page to make it easy to share your memories.

Send flowers to the Dowling family.